Abraham Lake, also known as Lake Abraham, is an artificial lake and Alberta's largest reservoir. It is located in the "Kootenay Plains area of the Canadian Rockies' front range", on the North Saskatchewan River in western Alberta, Canada.

Abraham Lake has a surface area of 53.7 km2 (20.7 sq mi) and a length of 32 km (20 mi). Although man-made, the lake has the blue color of other glacial lakes in the Rocky Mountains, which is caused by rock flour as in other glacial lakes.

Abraham Mountain, Elliott Peak, and the Cline River Heliport are located on the western shore of the lake. Mount Michener is situated on the eastern shore. Mount Ernest Ross lies at the southern tip of the lake.

The Government of Alberta sponsored a contest to name the lake in February 1972, during the final stages of construction of the Bighorn Dam. Students across the province were asked to submit names taking into consideration "historical significance, prominent persons, geography and topography, and the value of the lake." It was named for Silas Abraham, an inhabitant of the Saskatchewan River valley in the nineteenth century. 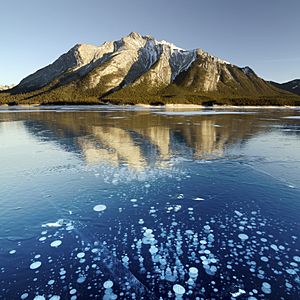 Trapped methane causes frozen bubbles to form under the ice on the lake's surface. This phenomenon results when decaying plants on the lake bed release methane gas, which creates bubbles that become trapped within the ice, in suspended animation, just below the surface as the lake begins to freeze. The visual effects formed by the resulting stacks of bubbles, frozen while rising toward the surface, combined with the clear blue water, have made Abraham Lake a popular destination for photographers and nature observers. The ice coverage of the lakes varies throughout the winter. It usually freezes by the end of December but did not freeze until January in 2020.

All content from Kiddle encyclopedia articles (including the article images and facts) can be freely used under Attribution-ShareAlike license, unless stated otherwise. Cite this article:
Abraham Lake Facts for Kids. Kiddle Encyclopedia.