Abrus precatorius, commonly known as jequirity bean or rosary pea, is a herbaceous flowering plant in the bean family Fabaceae. It is a slender, perennial climber with long, pinnate-leafleted leaves that twines around trees, shrubs, and hedges.

The plant is best known for its seeds, which are used as beads and in percussion instruments, and which are toxic because of the presence of abrin. Ingestion of a single seed, well chewed, can be fatal to both adults and children. The plant is native to Asia and Australia. It has a tendency to become weedy and invasive where it has been introduced.

Abrus precatorius is a severely invasive plant in warm temperate to tropical regions, so much so that it has become effectively pantropical in distribution. It had been widely introduced by humans, and the brightly coloured and hard-shelled seeds had been spread by birds. By the end of the twentieth century, it had been proclaimed as an invasive weed in many regions including some in Belize, Caribbean Islands, Hawaii, Polynesia and parts of the mainland United States. In Florida in particular, the plant has invaded undisturbed pinelands and hammocks, including the vulnerable pine rocklands.

Once Abrus precatorius plants have grown to maturity under favourable conditions, their deep roots are extremely difficult to remove, and the plants' aggressive growth, hard-shelled seeds, and ability to sucker, renders an infestation extremely difficult to eradicate and makes it very difficult to prevent re-infestation. Herbicides such as glyphosate are effective, but need skilled application if they are not to do more harm than good. 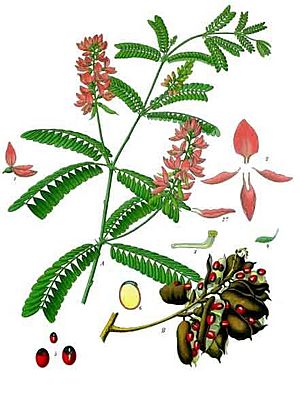 The toxin abrin is a dimer consisting of two protein subunits, termed A and B. The B chain facilitates abrin's entry into a cell by bonding to certain transport proteins on cell membranes, which then transport the toxin into the cell. Once inside the cell, the A chain prevents protein synthesis by inactivating the 26S subunit of the ribosome. One molecule of abrin will inactivate up to 1,500 ribosomes per second.

Symptoms are identical to those of ricin, except abrin is more toxic by almost two orders of magnitude; the fatal dose of abrin is approximately 1/75 that of the fatal dose of ricin (though the abrin in ingested seeds may be absorbed much more slowly than the ricin in Ricinus communis even if the seeds are chewed and the coat penetrated, allowing time for successful rescue efforts in at least some cases.) Abrin has an LD50 of only 0.56 μg/kg in mice, and Kingsbury lists a toxic dose in humans at 0.00015% body weight, or approximately 0.1 mg for a 150 lb human. Ingesting intact seeds may result in no clinical findings, as they can pass undigested through the gastrointestinal tract because of their hard shell.

This plant is also poisonous to horses. 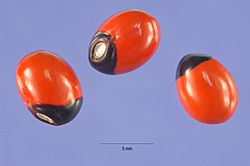 The bright red seeds of A. precatorius are strung as jewellery.

The seeds of Abrus precatorius are much valued in native jewelry for their bright coloration. Most beans are black and red, reminiscent of a ladybug, though other colors exist. Jewelry-making with jequirity seeds is somewhat hazardous. There are persistent reports that the workers who pierce the seeds in order to thread them can suffer poisoning or even death from a pinprick, but there seems to be little evidence. An online search found 265 scientific papers referring to Abrus precatorius, but not one of them dealt with occupational poisoning.

In Trinidad in the West Indies the brightly colored seeds are strung into bracelets and worn around the wrist or ankle to ward off jumbies or evil spirits and "mal-yeux"—the evil eye. The Tamils use Abrus seeds of different colors. The red variety with black eye is the most common, but there are black, white and green varieties as well.

In March 2012 a recall was issued for bracelets made using Jequirity Beans sold by the Eden Project and other outlets in the UK.

The seeds of Abrus precatorius are very consistent in weight, even under different moisture conditions due to the water-impermeable seed-coat. Formerly Indians used these seeds to weigh gold using a measure called a Ratti, where 8 Ratti = 1 Masha; 12 Masha = 1 Tola (11.6 Grams)..

Abrus precatorius, called "Gulaganji" in Kannada, kundu mani in Tamil, Guruvinda ginja in Telugu and 'Kunni kuru' in Malayalam, has been used in Siddha medicine for centuries.

In Rajasthan, India, Chirmi song is associated with this plant. There is also evidence that this plant has significant economic value to the traditional Zulu people, due to the fact that it is a form of income for Zulu people that make and sell crafts that were made from the seeds of this plant.

All content from Kiddle encyclopedia articles (including the article images and facts) can be freely used under Attribution-ShareAlike license, unless stated otherwise. Cite this article:
Abrus precatorius Facts for Kids. Kiddle Encyclopedia.