Accident ( ak-sə-dent) is a town in Garrett County, Maryland, United States. The population was 325 at the 2010 census.

Accident has been noted for its unusual place name. A person from Accident is called an "Accidental".

Accident, Garrett County, Maryland was one of the early settlements in the far west of Maryland.

When Lord Baltimore opened up the area he called Monocacy Manor to settlement in the early 1770s, Brooke Beall secured permission to survey 778 acres (3.15 km2). It will never be known for certain how Beall came to choose this particular spot, but the surveyor was given clear instructions where to start. He was to begin "in the center between two bounded white oak trees, standing on the North Side of the South fork of Bear Creek in or near a glade about one Hundred yards from said Run, about one or two Miles above a Lick known by the name of the "Cole Mine Lick", about four miles (6 km) above the mouth of Broad Creek and about one mile (1.6 km) East of a Ridge of the Negro Mountain." John Hanson, Jr., later a delegate to the Continental Congress, and President of the United States in Congress Assembled, on April 14, 1774, surveyed the land, finding that it only contained 682 acres (2.76 km2). For the next twelve years nothing was done with the survey. Revolution intervened, and it was not until February 15, 1786, that the land was granted by means of a patent to William Deakins. The following year the surrounding countryside was surveyed into military lots by Francis Deakins, lots that were meant as compensation for the soldiers who served from Maryland during the War of independence. Each soldier who served for two years received one lot of 50 acres (200,000 m2), officers received four lots of 50 acres (200,000 m2) each. 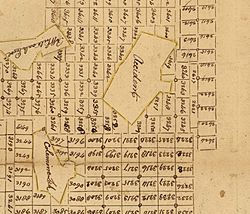 Kaese Mill was listed on the National Register of Historic Places in 1984. The James Drane House was listed in 1985.

According to the United States Census Bureau, the town has a total area of 0.49 square miles (1.27 km2), all land.

There were 141 households, of which 33.3% had children under the age of 18 living with them, 45.4% were married couples living together, 11.3% had a female householder with no husband present, 4.3% had a male householder with no wife present, and 39.0% were non-families. 32.6% of all households were made up of individuals, and 19.1% had someone living alone who was 65 years of age or older. The average household size was 2.30 and the average family size was 2.99. 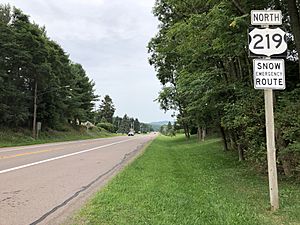 US 219 northbound in Accident

The primary method of transportation to and from Accident is by road. One state-maintained highway, U.S. Route 219, serves the town directly, following Main Street through the middle of Accident. To the north, US 219 connects Accident to Interstate 68 and U.S. Route 40, along with the town of Grantsville, before heading into Pennsylvania. Heading south, US 219 connects to Maryland Route 42, Maryland Route 39, Maryland Route 135 and U.S. Route 50, along with the towns of Oakland and Mountain Lake Park, before it enters West Virginia.

All content from Kiddle encyclopedia articles (including the article images and facts) can be freely used under Attribution-ShareAlike license, unless stated otherwise. Cite this article:
Accident, Maryland Facts for Kids. Kiddle Encyclopedia.