Grantsville is a town in the northern part of Garrett County, Maryland, United States, near the Pennsylvania border. The population was 766 as of the 2010 census.

Grantsville, half a mile west of the Casselman River, began as a small Amish and Mennonite settlement, called Tomlinson's or Little Crossing, along Braddock Road, which wound westward from Cumberland over Negro Mountain. Later a new village flourished as a stop along the nearby National Road, U.S. Route 40. From 1818, the national road carried hundreds of thousands of pioneers and settlers in stagecoaches and covered wagons. In the 1800s, an area just outside Grantsville (once known as Little Crossing but now marked by the intersection of Route 40 and River Road) was a major stop on the old National Pike. There is a "dip" in the road that travelers will not miss when they pass through Little Crossing on Route 40. 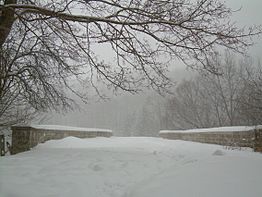 Signs mark the location of the post office and the blacksmith shop that stayed open all night to fix broken horseshoes. An 1879 article in Harper's Monthly described the wagons as "so numerous that the leaders of one team had their noses in the trough at the end of the next wagon ahead."

The Casselman Inn sits in the center of town, where it has provided food and lodging to travelers since 1824. A sign outside displays a replica 1842 stagecoach advertisement.

Near the Casselman Bridge, a historic stone arch bridge, are Penn Alps Restaurant and The Spruce Forest Artisan Village, which was founded in 1957 by Alta Schrock. Penn Alps Restaurant is housed in the last log hospitality house on the National Pike. It is situated between a 1797 gristmill and the Casselman Bridge, the longest single span of stone in America when built in 1813.

Spruce Forest Artisan Village, a part of the extended Penn Alps campus, has grown from a few cabins to some 12 log and frame structures of early vintage, two of which date to the Revolutionary War Period. Most of these provide studio space for artisans. Artisans work in various media, including bird carving, stained glass, basket making, hand-loom weaving, and hand-thrown pottery. 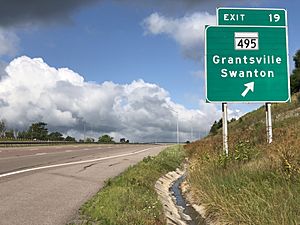 Grantsville was served by Greyhound bus until 2005. Since January 2011, it has been served by a Bayrunner Shuttle that originates in Grantsville and serves Frostburg, Cumberland, Allegany College of Maryland Cumberland Campus, Hancock, Hagerstown, Frederick Transit Center, Frederick Airport, BWI, BWI Amtrak Station, and Baltimore Greyhound Station.

According to the United States Census Bureau, the town has a total area of 0.98 square miles (2.54 km2), all land.

In the 1960s the town had a stable population of approximately 400 individuals.

There were 350 households, of which 32.3% had children under the age of 18 living with them, 39.1% were married couples living together, 17.1% had a female householder with no husband present, 4.6% had a male householder with no wife present, and 39.1% were non-families. 35.7% of all households were made up of individuals, and 19.5% had someone living alone who was 65 years of age or older. The average household size was 2.19 and the average family size was 2.77.

All content from Kiddle encyclopedia articles (including the article images and facts) can be freely used under Attribution-ShareAlike license, unless stated otherwise. Cite this article:
Grantsville, Maryland Facts for Kids. Kiddle Encyclopedia.