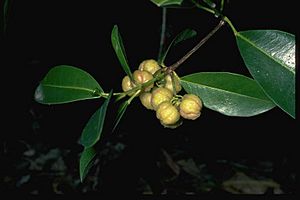 Acronychia littoralis, commonly known as the scented acronychia, is a species of small tree that is endemic to eastern coastal Australia. It has simple, glabrous, elliptic to egg-shaped leaves, small groups of yellow flowers and egg-shaped to more or less spherical creamy-yellow fruit.

Acronychia littoralis was first formally described in 1984 by Thomas Hartley and J.B. Williams in the journal Brunonia from specimens collected by J.B. Williams near Brunswick Heads in 1979.

Scented acronychia grows in rainforest within 2 km (1.2 mi) of the coast between Fraser Island in Queensland and Iluka in New South Wales.

All content from Kiddle encyclopedia articles (including the article images and facts) can be freely used under Attribution-ShareAlike license, unless stated otherwise. Cite this article:
Acronychia littoralis Facts for Kids. Kiddle Encyclopedia.