The luna moth (Actias luna) is a species of moth. It is in the family Saturniidae. The luna moth is thought to be North America's most beautiful insect.

The luna moth has a wingspan of 7.5 to 10.5 cm. The wings are lime-green. The bottom wings have long tails. There is a clear spot on each wing. There is a reddish-brown border on the top edge of the top wing. Some individuals have pinkish borders on the outer edge of both wings. Other individuals have yellowish borders instead. Adult Luna Moths have no mouth at all, rendering them completely harmless. They live by the fat they stored up at the larval stage. Because of this, they only live for about one week.

The luna moth is found in North America. It is found from Nova Scotia, west to North Dakota, south to Texas, and east to Florida.

The luna moth is found in habitats such as woodlands and forests. 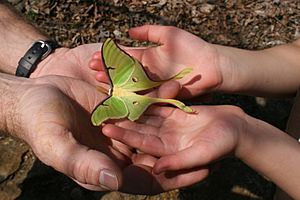 The caterpillars feed on the following host plants:

All content from Kiddle encyclopedia articles (including the article images and facts) can be freely used under Attribution-ShareAlike license, unless stated otherwise. Cite this article:
Actias luna Facts for Kids. Kiddle Encyclopedia.