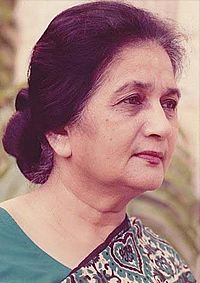 Ada Jafarey (22 August 1924 – 12 March 2015) was a Pakistani poet. She is thought to be as the first major Urdu poet who published as a woman. She had been called "The First Lady of Urdu Poetry". She had received awards including from the Government of Pakistan and literary societies of North America and Europe in recognition of her efforts.

Jafarey died in the evening of 12 March 2015 in a hospital in Karachi where she was being treated for a long-illness, at the age of 90.

All content from Kiddle encyclopedia articles (including the article images and facts) can be freely used under Attribution-ShareAlike license, unless stated otherwise. Cite this article:
Ada Jafri Facts for Kids. Kiddle Encyclopedia.