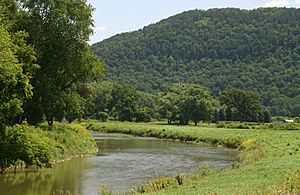 Addison is a village in Steuben County, New York, United States. The population was 1,763 at the 2010 census. The village and the surrounding town are named after the author Joseph Addison.

The Village of Addison is in the southeast part of the Town of Addison. The village is southwest of City of Corning.

Pinnacle State Park and Golf Course is east of the village.

According to the United States Census Bureau, the village has a total area of 1.9 square miles (4.9 km²).None of the area is covered with water.

The village is in the Southern Tier of New York.

From 1882 to 1961 Addison was also served by the Wellsville, Addison & Galeton Railroad and predecessors ( most notably the Baltimore & Ohio Railroad [1932—1956], the Buffalo & Susquehanna Railroad 1898-1932, and the Addison & Northern Pennsylvania Railroad]. The WA&G line was abandoned in 1961 by order of the Interstate Commerce Commission in order to promote highway transportation.

There were 724 households out of which 33.3% had children under the age of 18 living with them, 45.6% were married couples living together, 13.5% had a female householder with no husband present, and 35.4% were non-families. 28.9% of all households were made up of individuals and 14.1% had someone living alone who was 65 years of age or older. The average household size was 2.48 and the average family size was 3.02.

All content from Kiddle encyclopedia articles (including the article images and facts) can be freely used under Attribution-ShareAlike license, unless stated otherwise. Cite this article:
Addison (village), New York Facts for Kids. Kiddle Encyclopedia.