Africanized honeybees are a hybrid of the European honeybee and African bees. They are more dangerous and defensive than regular honeybees. Because of this, some people call them 'killer bees'. These hybrids tend to retain certain behavioral traits from their African ancestors that make them less desirable for domestic beekeeping.

They are descended from 26 Tanzanian queen bees accidentally released in 1957 in Southern Brazil from hives operated by biologist Warwick E. Kerr, who had interbred European honeybees and bees from southern Africa.

Hives containing these particular queens were noted to be especially defensive. Kerr was attempting to breed a strain of bees that would be better adapted to tropical conditions (i.e., more productive) than the European bee used in North America and southern South America. 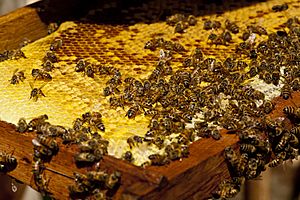 Africanized bees are characterized by their aggressiveness in establishing new hives and in their vigorous defensive behavior, attacking perceived threats to their hive, including people. Over the decades, hundreds of deaths in the Americas have been attributed to Africanized bees, many deaths resulting from multiple bee stings. This defensiveness has earned them the nickname "killer bees".

As of 2002 Africanized honeybees had spread from Brazil south to northern Argentina and north to South and Central America, México, Texas, Arizona, New Mexico, and southern California. Their expansion stopped for a time at eastern Texas, possibly due to the large number of European bee beekeepers in the area. However, discoveries of the bees in southern Louisiana indicate this species of bees has penetrated this barrier, or have come as a swarm aboard a ship. In the summer of 2005, africanized bees were discovered in six counties of Florida where they had apparently been present long enough to spread widely without detection.

How to avoid bees 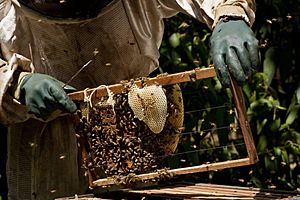 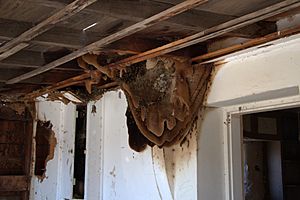 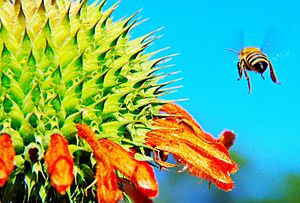 All content from Kiddle encyclopedia articles (including the article images and facts) can be freely used under Attribution-ShareAlike license, unless stated otherwise. Cite this article:
Africanized honeybee Facts for Kids. Kiddle Encyclopedia.