Wealthy American tourists have been visiting the area since the 1860s and bought large tracts of land around the lake. With most cottages staying in family hands, the lake's shores have been kept intact over the years, making Ahmic a lake with only moderate shoreline disturbance or alteration. Around the beginning of the 20th century, a number of fishing camps were built on Ahmic Lake, including Cedar Croft which stayed in business until the late 1950s. 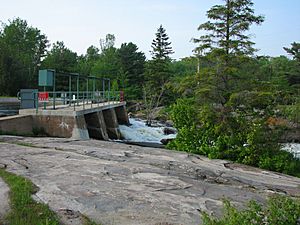 The lake is known for the presence of two swimming camps, Camp Chikopi, the boys camp, and Camp Ak-O-Mak, the girls camp. Chikopi was the world's first competitive swim camp. The two camps are directly across the lake from each other and to get from one to the other by water one paddles past Rocky Reef, which is a very exclusive tourist peninsula owned by a few American families. The tourist industry and the two swim camps are what kept the young people and adult residents in the small town of Ahmic Harbour employed for many decades and still contributes to the economic well-being of the area. Ahmic Harbour is located at the tip of the small bay of Ahmic Lake along Highway 124.

Ahmic Lake was an ideal lake for the two swim camps due to the clear water and a size that allowed for training of marathon swimmers such as Marty Sinn. 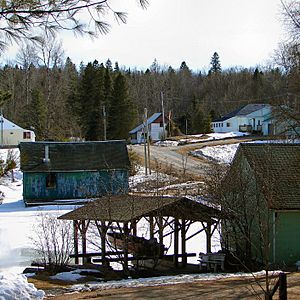 Fish species in the lake include:

All content from Kiddle encyclopedia articles (including the article images and facts) can be freely used under Attribution-ShareAlike license, unless stated otherwise. Cite this article:
Ahmic Lake Facts for Kids. Kiddle Encyclopedia.