Aill na Cronain (Irish: Aill na Crónáin; Cronan's cliff) is an inland west-facing limestone crag in The Burren in County Clare, Ireland. It is popular with novice rock climbers due to the number of short single-pitch 10–20 metre rock climbing routes in the S to HS rock climbing grades. It is beside the Aillwee Caves.

The crag is accessed by a 10–minute walk northwards from the upper car-park of the Ailwee Cave attraction (see map below). The crag is on private property but rock climbing has been allowed since the early 1970s, with the earliest recorded rock climbing routes dating from circa 1971. The UKClimbing online logbook notes that: "Skull slab is probably one of the best VDiffs you'll find in the country". Aill na Cronain is also listed in Ireland's Adventure Bucket List, which says that: "If you are just starting out [rock climbing], one of the best spots to visit is Aill na Cronain, just beside the Ailwee Cave".

In terms of layout, the centre of Aill na Cronain is the "Skull Buttress" which has a distinctive skull–appearance when viewed from a distance. Its "nose" contains the flat Skull Slab VD–grade climb. The "East Side" face, and "Far East Side" face, lie to the north of Skull Buttress. The "Butterfly" face, and the "Small Wall" face lie to its south. While most routes are between S and HS, more challenging routes have been put up on the "Skull Buttress" such as Raven (E3 6a), Monkey Business (E2 5c), and Sunbane (E1 5c). 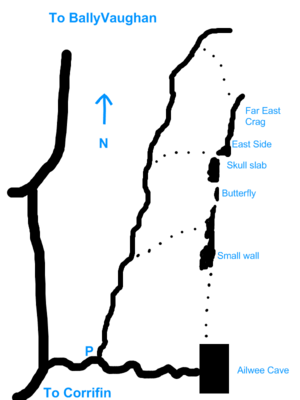 All content from Kiddle encyclopedia articles (including the article images and facts) can be freely used under Attribution-ShareAlike license, unless stated otherwise. Cite this article:
Aill na Cronain Facts for Kids. Kiddle Encyclopedia.