Ailladie (Irish: Aill an Daill; also known locally as the Ballyreen Cliffs and Ballyreen Point), is an 800-metre-long (2,600 ft) west-facing limestone sea cliff, that varies in height from 8 metres (26 ft) to 35 metres (115 ft), situated on the coast of The Burren in County Clare, Ireland. Ailladie is one of Ireland's most highly regarded rock-climbing locations, particularly for high technical grade climbs and deep-water soloing. It is also a location for shore-angling competitions, and, with its cliffs and view of the Aran Islands, a popular photography stop for tourists.

The name Ailladie is an anglicized translation from the Irish language name, Aill an Daill, which means The Blind Man's Cliff or Cliff of the Blind Person. The cliffs are also referred to locally, and by anglers, as Ballyreen Cliffs and Ballyreen Point, which is another anglicised version of the name given to Ailladie's local townland of Irish: Baile Uí Rinn; Ring's homestead.

Ailladie is an 800-metre (2,600 ft) long west-facing limestone sea-cliff, varying in height from 8 metres (26 ft) metres to 35 metres (115 ft) metres, that is situated on the coast of The Burren in County Clare, in Ireland. The northernmost sections of the cliff are not sea-cliffs, and their bases can be accessed by various climbing descent routes (see below) to flat limestone shelves below. However, the southernmost sections are all sea-cliffs and can only be accessed by rope abseil. The cliff straddles the Clare townlands of Ballyryan (southern section), and Crumlin (northern section).

Ailladie is hidden from view and is just off the R477 road, 1.5 kilometres (0.93 mi), at a point before the road turns inland and south-east to Lisdoonvarna. The Ailladie car-park (grid M0901102910) is marked on online maps and is opposite the Stone Wall section of the cliff (see Ailladie map below). Beside the car park, to the south, is the smaller rock climbing crag known as Ballyryan (climbers can be seen on the Ballyryan rock face by the passing R477 traffic).

Access to the base of the cliff is only possible without abseiling at the northernmost end, where a 3 metres (9.8 ft) roped fisherman's descent gives access to Ailladie's cliff base, which is a large limestone platform. 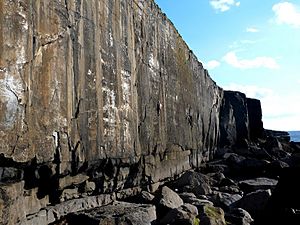 Climber on The Cutter (E4 6a), Mirror Wall, Ailladie

Ailladie's northern half covers the sections known to climbers as the Dancing Ledges and the Aran Wall, and sits above a large rock platform making it accessible, via the 3-metre roped fisherman's descent (a grassy ramp at the northernmost end of Ailladie), regardless of tides. Ailladie climbers also use the climber's descent area at O'Conner's Corner (10 metres, Diff). The Dancing Ledges is the lowest section of Ailladie with several climbs of 10–15 metres.

The first part of Ailladie's southern half is Mirror Wall (mostly graded E4–E7), and it is accessible by boulder-hopping at low-tide, although climbers also abseil down to the start of the climbs. The remainder of the southern half of Ailladie, the Stone Wall, An Falla Uaigneach, and Boulder Wall sections, require abseils for access. Many of the climbs in the imposing An Falla Uaigneach sector have to be started from a hanging belay, and the sector also offers climbers deep water soloing ("DWS") routes at very high grades of difficulty (e.g. grade 7c+), and with significant 30 metres (98 ft) drops. 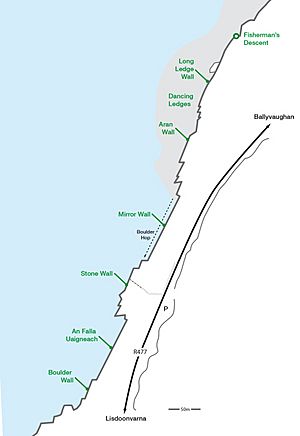 Layout of Ailladie (incl. parking). The grey area at the Fisherman's Descent are the northern limestone ledges used by shore-anglers

The rock is limestone, of good clean blue/grey quality and mostly hanging in a sheer vertical form. Its texture is described as "varies from smooth, in the few small areas recently exposed by rockfall, to a sharp popcorn texture which provides excellent friction". Most climbs follow steep narrow finger-crack lines, and the rock climbing protection is considered to be good. The last guidebook, published in 2008, lists 170 climbs (the current Ailladie online database, see below, has over 200), nearly all single-pitches, with grades up to E7 6c. Most Ailladie climbs are at and above E1 5b grades; there is little quality below VS 4c grade. The lower sections of some routes, and the climbing grade, can change due to the movements of large boulders in sea storms, and hence why many Mirror Wall climbers start from a hanging belay (see Mirror Wall photograph). 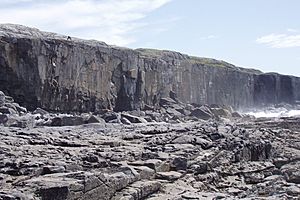 The middle sectors of Ailladie. On the left is the Aran Wall sector (with its distinctive dual square blocks halfway up the wall), with most climbs at E2–E5. To the right is the inset sheer Mirror Wall, with most climbs at E4–E7. The last prominent black corner visible on the right is the classic early Ailladie route, Pis Fliuch (grade HVS/5a, 1972).

The climbing potential of Ailladie was discovered in August 1972, when it was visited by a group of Dublin climbers. Word of its quality spread and development began in earnest. Ailladie, and the smaller nearby climbing crags in The Burren area, became recognised as the only on-shore limestone rock climbing locations in Ireland; the others being mainly granite, sandstone and dolerite. Since then, Ailladie has remained at the "cutting edge" of Irish outdoor traditional rock climbing, along with the dolerite Fair Head cliff in County Antrim. The UKC described Ailladie as "Best coastal limestone in the world! Fact!". The Irish Examiner said, "The mecca for rock climbing in Ireland is Ailladie". The Irish Times called it "one of Ireland’s best rock-climbing sites".

Visiting climbers either camp in the fields above the crag (however, there is no source of fresh water), or stay at one of the many hostels in the surrounding villages (particularly Doolin for nightlife and additional bouldering, or Fanore for serviced camping grounds). There are several nearby inland 10–20 metres (33–66 ft) high limestone crags with a good range of graded rock climbs, especially in the grades below VS, that are within walking distance (e.g. Ballyryan) or a short driving distance (e.g. Murroughkilly, Aill na Cronain and Oughtdarra), from Ailladie; however, these do not have anything like the quality or popularity of Ailladie. 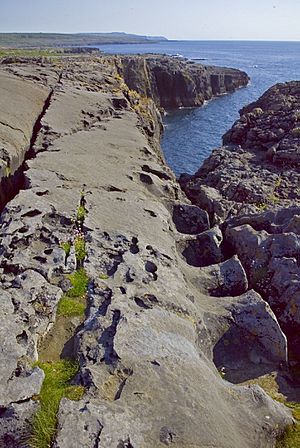 Looking south through a small zawn into Ailladie's Falla Uaigneach cliff-section, with the southerly ledges used for shore-angling after it.

The limestone ledges at the base of Ailladie's cliffs (at the far north and far south ends), are regarded for their shore-angling and are described as providing "superb bottom fishing". Anglers know the area as Ballyreen-south of Fanore, and several of the rocks have numbers painted on them for shore-angling competitions. Ballyreen is noted as one of the few shore-angling locations in Clare where sharks (porbeagle and blue), and conger eels have been successfully landed.

Because of the proximity of these low limestone ledges to deep Atlantic waters, the ledges have seen several fatalities over the years of anglers who were caught by sudden swells or large waves, and were carried out to sea.

All content from Kiddle encyclopedia articles (including the article images and facts) can be freely used under Attribution-ShareAlike license, unless stated otherwise. Cite this article:
Ailladie Facts for Kids. Kiddle Encyclopedia.