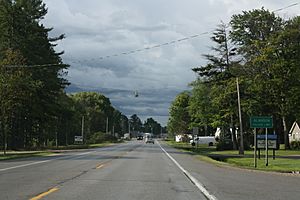 Alanson also has a hillside garden located adjacent to the former Grand Rapids and Indiana Railroad depot. The village has added a nice library in the community center. Both the town and the Crooked River are mentioned in a song title on the Sufjan Stevens album, Michigan. 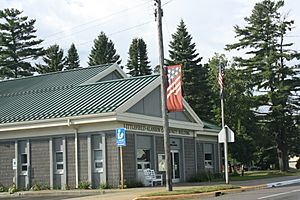 There were 307 households, of which 33.9% had children under the age of 18 living with them, 48.2% were married couples living together, 14.3% had a female householder with no husband present, 5.5% had a male householder with no wife present, and 31.9% were non-families. 27.0% of all households were made up of individuals, and 6.6% had someone living alone who was 65 years of age or older. The average household size was 2.40 and the average family size was 2.83.

All content from Kiddle encyclopedia articles (including the article images and facts) can be freely used under Attribution-ShareAlike license, unless stated otherwise. Cite this article:
Alanson, Michigan Facts for Kids. Kiddle Encyclopedia.