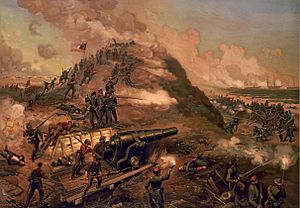 Assault of the fort during the Second Battle of Fort Fisher

He was educated at Harvard College, and studied law at Harvard Law School, receiving his diploma as a lawyer in 1858.

Lawrence, who did not practice law, then served as the attaché for the United States at Vienna after he turned down the position of Secretary of the American Legation at Vienna.

At the start of the U.S. Civil War, he returned to serve in the Union Army and was commissioned a Captain in the 54th New York Volunteer Infantry. In 1864, he was promoted Lieutenant Colonel and commanded the 2nd Regiment Cavalry U.S. Colored Troops in actions through Virginia.

On August January 15, 1865, he led the assault on Fort Fisher in Virginia, which captured the Confederate post for the Union. In the battle, he was severely wounded and lost his left arm. For his gallantry in the battle of Fort Fisher, he was brevetted Brigadier-General of the U.S. Volunteers on March 25, 1865. He was called the "Hero of Fort Fisher."

On October 2, 1866, he was appointed by President Andrew Johnson as the United States Minister to Costa Rica. He presented his credentials on January 18, 1867 and served until his recall, around June 24, 1868. During a visit to Washington, he engaged in a duel, fought in Belgium with Hon. Amédée Van den Nest, the former attaché of the Prussian legation, over words exchanged with Lawrence's wife in letters between Van den Nest and Eva. The subsequent sensation caused Van den Nest to lose his position, forced Lawrence to resign his post, and effectively ended the marriage of Albert and Eva. Eva and Van den Nest later married.

In 1880, Lawrence became a Republican and came out in favor of James A. Garfield and Chester Arthur in the presidential race of 1880. In his editorial, The New York Times stated that his endorsement meant that "The Democrats are mortified at the spectacle of a son of the sage of Ochre Point coming out so publicly for Garfield and Arthur."

In September 1865, Lawrence was married to Eveline McLean "Eva" (née Taylor) Kingsbury (1845–1917), youngest daughter of Gen. Joseph Pannell Taylor and niece of the 12th U.S. President Zachary Taylor. She was the widow of Capt. Henry Walter Kingsbury of Chicago who was killed at the Battle of Antietam and was heir to the vast estate of Major Kingsbury. Before their public divorce in 1879, they were the parents of:

Lawrence died at the Everett House in New York City on January 1, 1887. After a service at St. Mark's Church on Stuyvesant Street, he was buried at the Lawrence burying grounds in Astoria, Queens. His daughter inherited his estate, which was very small, and a share of her grandfather's estate, which was quite vast.

All content from Kiddle encyclopedia articles (including the article images and facts) can be freely used under Attribution-ShareAlike license, unless stated otherwise. Cite this article:
Albert G. Lawrence Facts for Kids. Kiddle Encyclopedia.