The Albert Pike Memorial is a public artwork in Washington, D.C. honoring Albert Pike (1809–1891), a senior officer of the Confederate States Army as well as a poet, lawyer, and influential figure in the Scottish Rite of freemasonry. The memorial, which now only includes the base and Goddess of Masonry sculpture, is sited near the corner of 3rd and D Streets NW in the Judiciary Square neighborhood. The memorial's two bronze figures were sculpted by Gaetano Trentanove, an Italian-American artist responsible for another Washington, D.C. sculptural landmark, the Daniel Webster Memorial. The dedication ceremony in 1901 was attended by thousands of Masons who marched in a celebratory parade.

The memorial is one of 18 Civil War monuments in Washington, D.C., which were collectively listed on the National Register of Historic Places in 1978. The memorial is owned and maintained by the National Park Service, a federal agency of the Interior Department. The Pike statue was the only outdoor sculpture in Washington, D.C. honoring a Confederate general. Though Pike was depicted as a Mason, not a soldier, for decades the memorial often stirred controversy. The statue was toppled and burned by protesters in June 2020, as protests continued in response to the killing of George Floyd.

Albert Pike (1809–1891) was a Massachusetts native who became a schoolteacher and frontiersman before settling in Arkansas. There he began teaching again and continued to write poetry, a lifelong passion. His letters to local newspapers led to a job offer as editor for the Arkansas Advocate, a newspaper in Little Rock affiliated with the Whig Party. Pike later became a successful lawyer specializing in Native American claims against the U.S. government. He served as a captain in the Mexican–American War and resumed his legal practice following the war.

In the 1850s, Pike switched his allegiance to the Know Nothing Party due to the Whig Party's reluctance to embrace slavery and sided with the Confederacy when Southern states seceded from the United States in 1861. During the Civil War, Pike's knowledge of Native Americans led to him being commissioned a brigadier general in the Confederate Army.

Pike assembled an Indian cavalry loyal to the Confederacy and led them in battle at Pea Ridge, where his poor leadership and inability to keep the cavalry engaged with the enemy was a contributing factor to the Confederates' loss. Alleged atrocities committed by his troops include the scalping of captured enemy combatants.

A few months after the battle, Pike resigned from the army and resumed practicing law. Following the war, Pike settled in Memphis, Tennessee, where it was rumored he became involved with the Ku Klux Klan (KKK), though no definitive evidence proves his relationship with the organization. 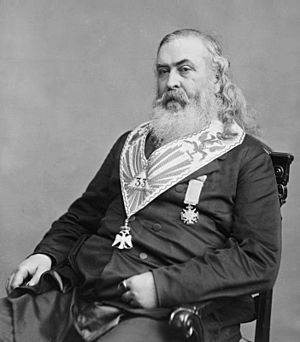 Around 1870, Pike moved to Washington, D.C. to practice law and continue serving as Sovereign Grand Commander (SGC) of the Washington-based Supreme Council, Southern Jurisdiction (SCJC), one of two jurisdictions in the Scottish Rite. Pike had become a Mason in 1850 and quickly rose up its ranks, becoming the SGC in 1859. He rewrote and interpreted Masonic rituals and compiled the Southern Jurisdiction's first philosophical document, Morals and Dogma of the Ancient and Accepted Scottish Rite of Freemasonry, an influential book in the organization. Pike continued serving as SGC until his death in 1891.

Pike once stated "When I am dead, I wish my monument to be builded only in the hearts and memories of my brethren of the Ancient and Accepted Rite". However, a few years after his death, Masons began plans for a monument in the nation's capital.

The SCJC chose Italian-American artist Gaetano Trentanove to sculpt the memorial. Trentanove was an acquaintance of Pike and had recently received praise for his sculpture of Jacques Marquette housed in the National Statuary Hall Collection. While Trentanove was working on the commission, Masons lobbied members of Congress for public land in Washington, D.C. where the monument could be placed.

When members of the Grand Army of the Republic (GAR), a fraternal organization of Union veterans, became aware of plans for a public memorial to be erected in Washington, D.C. in honor of a Confederate general, they contacted congressmen and told them it would be a disgrace to the memories of all Union soldiers. Nevertheless, on April 9, 1898, members of Congress approved the memorial after Masons assured them it would depict Pike as a civilian, not a soldier.

Excavation for the memorial site took place in the summer of 1899 and on July 4, 1900, the cornerstone was laid. Prior to the cornerstone ceremony, several members of the SCJC, including Third Assistant Secretary of State Thomas W. Cridler, gathered at the House of the Temple at 433 3rd Street NW (current site of the Tax Court Building), where Pike had lived, to reminisce.

The men signed a parchment noting the date and who was in attendance. At the ceremony, the parchment was enclosed in a bottle and placed in an opening of the memorial's foundation. The total cost of the memorial was $15,000, raised by members of the SCJC. Fabrication was carried out by the Washington Granite Monumental Company and the sculptures founded by Fonderia Galli. 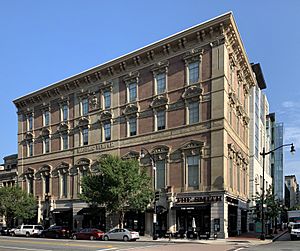 The dedication parade began at the Masonic Temple.

The dedication ceremony on October 23, 1901, was planned to coincide with the centennial anniversary of the SCJC. At 2 P.M., members of the Grand Lodge of the Masons of the District of Columbia led by Grand Master Harry Standiford marched from the Masonic Temple at 9th and F Streets NW to the House of the Temple where they joined thousands of Masons taking part in the parade.

The parade ended at the memorial site, on a triangular lot bordered by 3rd Street, D Street, and Indiana Avenue NW. A large temporary stand for invited guests and ceremony participants was built at the base of the memorial.

Following a musical performance by Haley's Washington Band, grand commanders of the SCJC, the Scottish Rite's Northern Jurisdiction, and Royal Order of Scotland all released the halyard holding the U.S. flag that covered the memorial. This was followed by loud cheers from the crowd and a prayer given by Masonic chaplain Charles Alvin Smith. Frederick Webber, secretary general of the SCJC, then gave a speech and formally presented the memorial to the American people:

I am here to represent the Supreme Council, and in its name to present to the government of the United States this statue. It will long stand as a loving tribute from his brethren of the Ancient and Accepted Scottish Rite of Freemasonry.

President of the District Commission H. B. F. McFarland accepted the memorial on behalf of the American people:

Although Albert Pike was a soldier in the Civil War, this statue will commemorate him rather as a victor in the honorable rivalries of peace. It is well that you thus add to the comparatively small number of statues in the city of Washington which honor the victories of peace rather than of war.

After additional music was performed by the band, a benediction was given and the ceremony concluded. Throughout the ceremony, Pike was portrayed as a kind poet, though there were a few references to his service as a Confederate general.

For many years, members of the United Daughters of the Confederacy would hold ceremonies at the site on Pike's birthday and Masons would decorate the memorial, though the latter still happens on occasion. The memorial was removed in 1972 during construction of Interstate 395 and reinstalled in September 1977 near its former site.

The memorial is one of 18 Civil War monuments in Washington, D.C., which were collectively listed on the National Register of Historic Places on September 20, 1978, and the District of Columbia Inventory of Historic Sites on March 3, 1979. The memorial is also designated a contributing property to the Pennsylvania Avenue National Historic Site, established on September 30, 1965.

In 1993, the memorial was surveyed by the Smithsonian Institution as part of its Save Outdoor Sculpture! program and it was deemed "well maintained." The memorial is owned and maintained by the National Park Service (NPS), an operating unit of the United States Department of the Interior. 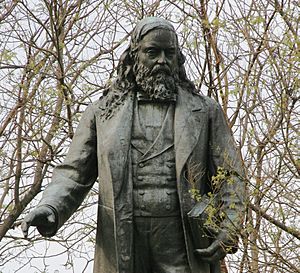 Closeup of the Albert Pike statue

The Pike memorial included the only outdoor sculpture in Washington, D.C. honoring a Confederate general, although he was dressed as a civilian, not a soldier. The memorial is located in Reservation 188 at the southwest corner of 3rd and D Street NW in the Judiciary Square neighborhood. It is sited between the U.S. Department of Labor's Frances Perkins Building and Metropolitan Police Department headquarters.

The bronze sculpture of Pike measured 11 ft (3.4 m) high and depicted him as a Masonic leader, not a Confederate officer. He was wearing a double-breasted vest and a long coat. His right arm was extended and with the left hand he held a book, thought to be his work Morals and Dogma of the Ancient and Accepted Scottish Rite of Freemasonry.

The sculpture surmounted a granite, Beaux-Arts base that is 17.2 ft (5.2 m) tall and 17.1 ft (5.2 m) wide. On the front of the memorial (north side), a bronze sculpture representing the Goddess of Masonry rests halfway down the base. With her right hand, she holds the banner of the Scottish Rite on a staff. She is wearing a long Greek robe and facing downward, her ankles crossed and feet dangling.

Inscriptions on the memorial include the following:

All content from Kiddle encyclopedia articles (including the article images and facts) can be freely used under Attribution-ShareAlike license, unless stated otherwise. Cite this article:
Albert Pike Memorial Facts for Kids. Kiddle Encyclopedia.