Albizia lebbeck is a species of Albizia, native to Indomalaya, New Guinea and Northern Australia and widely cultivated and naturalised in other tropical and subtropical regions. English names for it include lebbeck, lebbek tree, flea tree, frywood, koko and woman's tongue tree. The latter name is a play on the sound the seeds make as they rattle inside the pods. Being one of the most widespread and common species of Albizia worldwide, it is often simply called siris, though this name may refer to any locally common member of the genus.

In the West Indies and certain parts of South America this tree is known as a 'Shak Shak Tree' because of the sound the seeds make in the pod. In Tamil Nadu , the tree is known as 'vaagai' as the ancient kings of the Sangam Age had worn the garland made by this flower whenever they win battles . Similarly , 'vaagai' means 'victory' in Tamil. 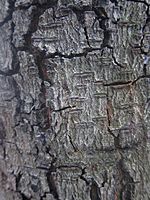 Its uses include environmental management, forage, medicine and wood. It is cultivated as a shade tree in North and South America. In India and Pakistan, the tree is used to produce timber. Wood from Albizia lebbeck has a density of 0.55-0.66 g/cm3 or higher.

Even where it is not native, some indigenous herbivores are liable to utilize lebbeck as a food resource. For example, the greater rhea (Rhea americana) has been observed feeding on it in the cerrado of Brazil.

Lebbeck is an astringent, also used by some cultures to treat boils, cough, to treat the eye, flu, gingivitis, lung problems, pectoral problems, is used as a tonic, and is used to treat abdominal tumors. The bark is used medicinally to treat inflammation. This information was obtained via ethnobotanical records, which are a reference to how a plant is used by indigenous peoples, not verifiable, scientific or medical evaluation of the effectiveness of these claims. Albizia lebbeck is also psychoactive.

The taxonomic history of A. lebbeck is somewhat convoluted. It was originally described by Carl Linnaeus as Mimosa lebbeck. In its original description the Mimosa lebbeck was a large Acacia tree that grew in Egypt. George Bentham placed the species in its present genus, but other authors believed that the plant described by Linnaeus was the related Albizia kalkora as described by Prain (based on the Mimosa kalkora of William Roxburgh), and erroneously referred to this species as Albizia lebbeck. However, Francisco Manuel Blanco used Mimosa lebbeck to refer to Albizia retusa ssp. retusa. In addition, the specific epithet is occasionally misspelled lebbek.

Independently, there also exists a genus named Lebeckia, whose range is restricted to South Africa. It is not related to A. lebbeck, but a member of the Faboideae, a different legume subfamily.

All content from Kiddle encyclopedia articles (including the article images and facts) can be freely used under Attribution-ShareAlike license, unless stated otherwise. Cite this article:
Albizia lebbeck Facts for Kids. Kiddle Encyclopedia.