Alcovy Mountain is a monadnock in the state of Georgia similar to Kennesaw Mountain in the city of Marietta. It is located in Walton County four miles south of the city of Monroe. With a summit elevation of 1,070 ft (326 m), the mountain is the highest point in Walton County, and is the southeasternmost mountain of significance in the Appalachians.

The terrain around the mountain averages roughly 750 feet (230 m) AMSL. Alcovy (pronunciation: al-CO-vee) Mountain rises steeply from the banks of the Alcovy River, which arises farther north, in Gwinnett County. 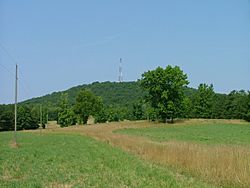 View of Alcovy from the eastern, less prominent face

The name of Alcovy Mountain comes from the river that flows north to south directly west of the mountain. The native Muskogean Indians named the river "Ulcofauchatchie", meaning "a river among the bog potato", otherwise known as the pawpaw tree. As different accented tongues of European immigrants settled in this area, "Alcovy" latter became the name. Although this river flows for over 50 miles until its confluence as a tributary of the Ocmulgee River, these lowland "bog potato" swamps only occur for less than a dozen miles around the mountain. Today, like several other low mountains in the area, Alcovy is privately owned and access is prohibited. However, twenty miles West in southeast Atlanta are three other monadnocks that are protected. These mountains have large rock outcrops that have merited their conservation. They are Arabia Mountain, Panola Mountain, and the world-famous Stone Mountain.

All content from Kiddle encyclopedia articles (including the article images and facts) can be freely used under Attribution-ShareAlike license, unless stated otherwise. Cite this article:
Alcovy Mountain Facts for Kids. Kiddle Encyclopedia.