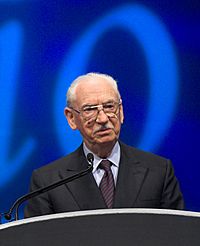 Alejandro Zaffaroni (27 February 1923 – 1 March 2014) was a Uruguayan–American entrepreneur. He is best known for founding several successful biotechnology companies in Silicon Valley. He was born in Montevideo.

Zaffaroni died from complications of dementia on 1 March 2014 at his home in Atherton, California. He was 91 years old.

All content from Kiddle encyclopedia articles (including the article images and facts) can be freely used under Attribution-ShareAlike license, unless stated otherwise. Cite this article:
Alejandro Zaffaroni Facts for Kids. Kiddle Encyclopedia.