Alexander Caldwell Jones was an American businessman and Confederate States Army officer during the American Civil War. He was born in 1830 near Moundsville, West Virginia, at that time a part of Virginia, to Garrison B. Jones and Martha Houston. 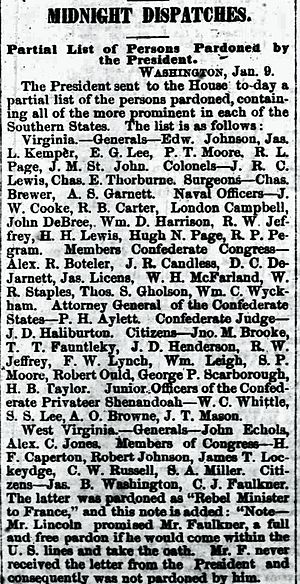 He attended the Virginia Military Institute and graduated in 1850. He then studied law and moved to Minnesota, where he became state adjutant general in 1858 and served in that post for two years. When his native state declared its secession from the United States in 1861 he returned to Virginia, where he joined the 44th Virginia Infantry. He was commissioned a lieutenant-colonel on May 1, 1862, and was wounded in the Battle of Gaines's Mill.

After convalescing from his injuries and serving in the Bureau of Conscription he resigned his commission on June 16, 1863, and requested a transfer to the Trans-Mississippi Dept. There he served on Gen. Magruder's staff and was then given the command of a Texas brigade of infantry. Gen. Kirby Smith recommended his promotion to brigadier-general on March 16, 1865, although there is no confirmation of his appointment. Jones was paroled in Brownsville, TX on July 24, 1865, as a "brigadier-general". He was given a presidential pardon, dated August 15, 1865, sponsored by the Attorney General and the Hon. J.J. Jackson, which described him as a "rebel brigadier general".

Jones then left for Mexico to serve under Emperor Maximilian until the fall of his regime. He then returned to West Virginia, and lived in Wheeling with his wife Ella Clemens' family. He became the editor of the National Intelligencer, but that newspaper failed in 1869.

All content from Kiddle encyclopedia articles (including the article images and facts) can be freely used under Attribution-ShareAlike license, unless stated otherwise. Cite this article:
Alexander C. Jones Facts for Kids. Kiddle Encyclopedia.