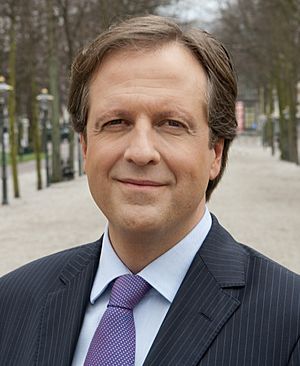 He was a member of the Second Chamber and also parliamentary leader from 2006 till 2018. Previously he was a government minister in the Second Balkenende cabinet, mayor of Wageningen, party chair, and an alderman of Leiden.

Pechtold studied art history and archaeology at Leiden University, and worked as an auctioneer before entering into politics.

All content from Kiddle encyclopedia articles (including the article images and facts) can be freely used under Attribution-ShareAlike license, unless stated otherwise. Cite this article:
Alexander Pechtold Facts for Kids. Kiddle Encyclopedia.