Aleksandr Vasilyevich Samsonov (14 November 1859 - 30 August 1914) was a career officer in the cavalry of the Imperial Russian Army and a general during the Russo-Japanese War and World War I. He was the commander of the Russian Second Army which was surrounded and defeated by the German Eighth Army in the Battle of Tannenberg, one of the early battles of World War I. Ashamed by his loss of the Army, Samsonov killed himself while retreating from the battlefield.

Command of the Russian Second Army 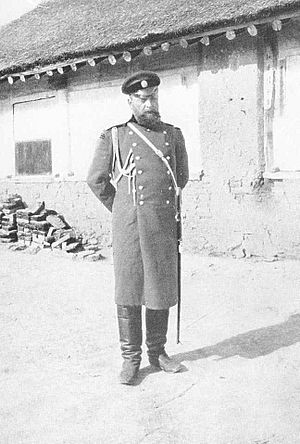 Samsonov at the outbreak of the war

At the start of World War I, Samsonov received the command of the Russian Second Army for the invasion of East Prussia, which was guarded by the German Eighth Army under the command of General Maximilian von Prittwitz. Samsonov advanced slowly into the south-western corner of East Prussia, intending to link up with the Russian First Army, commanded by General Paul von Rennenkampf, which had started advancing into the north-east section of East Prussia. However, lack of communications between the two armies, and with the rear command of the Northwest Army Group, hindered co-ordination.

Rennenkampf and the Russian First Army were the first to encounter the German Eighth Army, winning the Battle of Gumbinnen. The defeat led the German High Command to dismiss von Prittwitz and his chief of staff, replacing them with General (later Field Marshal) Paul von Hindenburg and General Erich Ludendorff.

Hindenburg and Ludendorff arrived on the Eastern Front and decided to attack Samsonov's advancing forces with the full weight of the Eighth Army. Hindenburg and Ludendorff were strengthened in making this decision by intercepted Russian wireless communications, which indicated that Rennenkampf and the Russian First Army could not reach the proposed battle in time to be of assistance, and by an intercepted order from Samsonov, showing the movement of his forces.

The armies made contact on August 22 and for six days the numerically superior Russians had some success. However, by August 29 the Germans had surrounded Samsonov's Second Army in the woods between Allenstein and Willenberg. The rout that followed was named the Battle of Tannenberg by Hindenburg, to compensate for a defeat of the Teutonic Knights by the Kingdom of Poland and the Grand Duchy of Lithuania at the same location five centuries earlier.

Samsonov attempted to retreat, but with his army now trapped in a German encirclement, the German forces killed or captured most of his troops. Only 10,000 of the 150,000 Russian soldiers managed to escape the encirclement. At least 92,000 Russian troops were taken prisoner, and between 300 and 500 Russian guns had been captured, out of the Second Army's initial total of some 600. Over 30,000 Russian soldiers were estimated dead or missing.

Samsonov and a small group of staff officers and men attempted to escape the encirclement, at first on horseback, and then on foot, over swampy ground, in the darkness of the night of August 29. Samsonov repeatedly was heard to say "The Czar trusted me. How can I face him after such a disaster?" They reached the town of Willenberg late at night, but found it was held by the Germans. At approximately 1 a.m. on August 30, Samsonov slipped away from his party into the forest.

A German search party eventually found Samsonov's body in the adjacent fores and realised that he had killed himself.

The Germans buried Samsonov in Willenberg. In 1916, through the intercession of the International Red Cross, the Germans transferred his body to his widow, who was able to bury him in Russia.

All content from Kiddle encyclopedia articles (including the article images and facts) can be freely used under Attribution-ShareAlike license, unless stated otherwise. Cite this article:
Alexander Samsonov Facts for Kids. Kiddle Encyclopedia.