Olsztyn is a city on the Łyna River in northeastern Poland. Olsztyn is the capital of the Warmian-Masurian Voivodeship, and is a city with county rights. The population of the city was estimated at 173,070 residents in 2017.

Founded as Allenstein in the 14th century, Olsztyn was under the control and influence of the Teutonic Order until 1466, when it was incorporated into the Polish Crown. For centuries the city was an important centre of trade, crafts, science and administration in the Warmia region linking Warsaw with Königsberg. Following the First Partition of Poland in 1772 Warmia was annexed by Prussia and ceased to be the property of the clergy. In the 19th century the city changed its status completely, becoming the most prominent economic hub of the southern part of Eastern Prussia. The construction of a railway and early industrialization greatly contributed to Olsztyn's significance. Following World War II, the city returned to Poland in accordance with the Potsdam Agreement.

Since 1999 Olsztyn has been the capital city of the Warmia-Masuria. In the same year, the University of Warmia and Masuria was founded from the fusion of three other local universities. Today, the Castle of Warmian Bishops houses a museum and is a venue for concerts, art exhibitions, film shows and other cultural events, which make Olsztyn a popular tourist destination.

The most important sights of the city include the medieval Old Town and the Olsztyn Cathedral, which dates back more than 600 years. The picturesque market square is part of the European Route of Brick Gothic and the cathedral is regarded as one of the greatest monuments of Gothic architecture in Poland.

Olsztyn, for a number of years, has been ranked very highly in quality of life, income, employment and safety. It currently is one of the best places in Poland to live and work. It is also one of the happiest cities in the country. 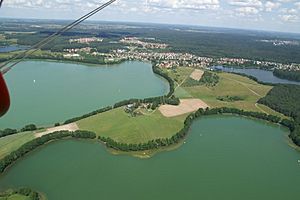 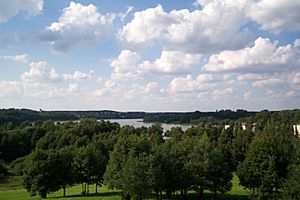 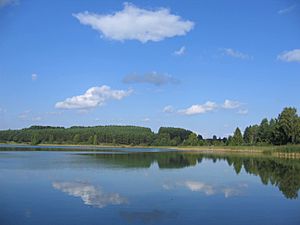 Olsztyn is located in the north-east part of Poland in the region known as the "Thousand Lakes".

More than half of the forests occupying 21.2% of the city area form a single complex of the Municipal Forest (1050 ha) used mainly for recreation and tourism purposes. Within the Municipal Forest area are situated two peat-land flora sanctuaries, Mszar and Redykajny. Municipal greenery (560 ha, 6.5% of the town area) developed in the form of numerous parks, green spots and three cemeteries over a century-old. The greenery includes 910 monuments of nature and groups of protected trees in the form of beech, oak, maple and lime-lined avenues.

The city is situated in a lake region of forests and plains. There are 15 lakes inside the administrative bounds of the city (13 with areas greater than 1 ha). The overall area of lakes in Olsztyn is about 725 ha, which constitutes 8.25% of the total city area. 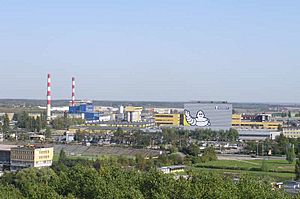 The Michelin tyre company (former Stomil Olsztyn) is the largest employer in the region of Warmia and Masuria. Other important industries are food processing and furniture manufacturing.

There is a bus network with 36 bus lines, including 6 suburban lines and 2 night-time lines.

In 1939, due to poor economic situation throughout the interwar period and city's growing population, a trolleybus line began operation, partially replacing the original tram network. Olsztyn was a third city in Poland having this method of transportation. During the Second World War the cars were mainly driven by women.

The trolleybus network consisting of 4 lines was liquidated on 31st of July 1971. 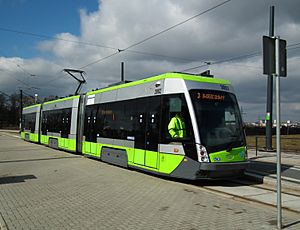 Historically, city's first tram line was built in 1907 and gradually expanded over the years. It ceased operation in 1965.

In 2006 authorities considered reintroduction of trams in the city to address transport problems and subsequently concluded feasibility studies on the matter in 2009. An 11 kilometres (7 miles) tram network was built between 2011–2015. The contract was signed in 2011 and construction commenced in 2012. It was a first new tram system built in Poland in 55 years; 15 low-floor Tramino trams were ordered from Solaris in September 2012. There are currently 3 tram lines in operation.

A 6 kilometres (4 miles) extension is planned and Turkish manufacturer Durmazlar had been selected to supply 24 trams for the network.

Olsztyn has train connections to Warsaw, Gdańsk, Szczecin, Poznań, Bydgoszcz, Iława, Działdowo and Ełk. Olsztyn Główny is the main railway station in the city. Plans exist to demolish current building and replace it with new infrastructure, contrary to previous information about current building being renovated. 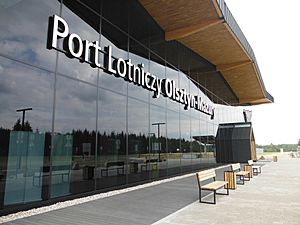 The region and city is served by Olsztyn-Mazury Airport with scheduled international passenger flights. It is located in Szymany, 10 km off Szczytno and 58 km south of the city of Olsztyn. The airport operates flights to London, Dortmund, Lviv, Cracow and Burgas.

All content from Kiddle encyclopedia articles (including the article images and facts) can be freely used under Attribution-ShareAlike license, unless stated otherwise. Cite this article:
Olsztyn Facts for Kids. Kiddle Encyclopedia.