Battle of Tannenberg facts for kids

The battle took place near Allenstein. It was named after Tannenberg by the Germans. They wanted to express that they had made good their defeat at the medieval Battle of Tannenberg or (Grunwald), in which they lost the battle to the Lithuanians. Here The Templar Order were finally defeated.

The Russian Empire's army had been invading Germany. The Russian army used a radio to transmit their attack plan, but they did not encrypt the messages, believing that the Germans would not have access to Russian translators. However, the Germans easily intercepted the transmissions, and were expecting every move of the Russians.

The Russian armies crossed into East Prussia with Königsberg as their goal. 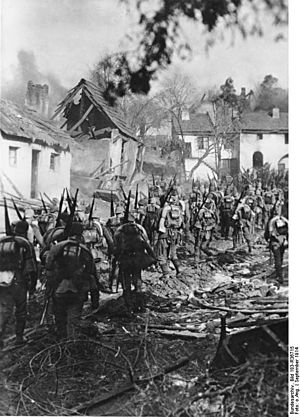 German infantry during the Battle of Tannenberg

At first, the battle appeared to go well for the Russians, who pushed westward before a German counterattack on August 20, which was repulsed. The German theatre commander, General Maximilian von Prittwitz, was sacked when he attempted to completely abandon East Prussia to the Russians. Due to the failure of the Germans to effectively break through on the Western Front in accordance with the Schlieffen Plan, headquarters began to panic.

While replacements taken from the West were in transit, the 8th Army's Chief of Operations, Max Hoffmann, redeployed the German forces. Hoffmann's plan left a screening force to delay the Russian 1st Army (under General Paul von Rennenkampf) which was approaching from the east, and set a trap for the Russian 2nd Army (under General Alexander Samsonov) which was moving up from the south.

The German field commander, General Hermann von Francois, allowed the 2nd Army to advance, and then cut them off from their supply route. This forced massive surrenders, and saw the almost complete destruction of the 2nd Army near Frogenau with 30,000 soldiers killed and 90,000 captured. 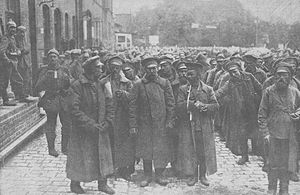 Rather than report the loss of his army to the Czar, Samsonov killed himself on August 29, 1914. He would not be found until later the next day by a German patrol.

The German victory compelled Rennenkampf to withdraw his army from East Prussia, and cleared German territory of the invading forces.

The battle is at the centre of Alexander Solzhenitsyn's novel August 1914.

Interesting facts about the Battle of Tannenberg 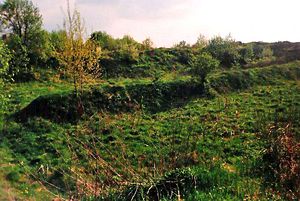 1998 photo of the foundations of the Tannenberg Memorial, which later served as the burial site of Paul von Hindenburg

All content from Kiddle encyclopedia articles (including the article images and facts) can be freely used under Attribution-ShareAlike license, unless stated otherwise. Cite this article:
Battle of Tannenberg Facts for Kids. Kiddle Encyclopedia.