Alice in Wonderland is a 1951 American animated movie produced by Walt Disney and based on the 1865 story Alice's Adventures in Wonderland by Lewis Carroll. It is the thirteenth Disney animated classic and includes the voices of Kathryn Beaumont (who also voiced Wendy Darling in the 1953 Disney movie Peter Pan) as Alice, and Ed Wynn as the Mad Hatter.

The film premiered in London on July 26, 1951, and in New York City on July 28, 1951 and was considered a flop on its initial release, leading to Walt Disney showing it on television as one of the first episodes of his TV series Disneyland. It proved to be very successful on television, especially during the psychedelic era.

It was eventually re-released in theaters which proved to be massively successful. The film became even more successful through merchandising and home video releases. It has since been regarded as one of Disney's greatest animated classics, notably one of the biggest cult classics in the animation medium, as well as one of the best film adaptations of Alice.

The title song, composed by Sammy Fain, has become a jazz standard, adapted by jazz pianist Dave Brubeck in 1952. The song, "In a World of My Own," is included on the orange disc of Classic Disney: 60 Years of Musical Magic.

A live-action adaptation of Carroll's works and animated film, Alice in Wonderland, directed by Tim Burton, was released in 2010. 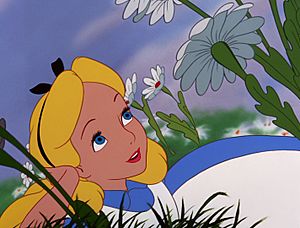 A little girl named Alice is bored from her history lesson given by her sister and she sneaks away. While walking to the riverside Alice sees an unusual White Rabbit, who was holding large golden pocket watch and running off in a hurry exclaiming that he is "late for a very important date".

Curious to know where the Rabbit is going, Alice decides to follow him down the rabbit hole, where her adventures in Wonderland begin.

She changes sizes from big to small, meets bizarre people, like the Mad Hatter, March Hare, Cheshire Cat, Tweedledum and Tweedledee, Queen of Hearts and the Caterpillar, among many other strange characters.

The Queen orders Alice's execution. Alice flees, and the Queen, King, card guards and other characters give chase, she reaches the small door where she began her adventures and finds herself outside asleep. She yells at herself to wake up; she does thanks to her sister, and they return home for tea.

All content from Kiddle encyclopedia articles (including the article images and facts) can be freely used under Attribution-ShareAlike license, unless stated otherwise. Cite this article:
Alice in Wonderland (1951 movie) Facts for Kids. Kiddle Encyclopedia.