Alice in Wonderland is a dark ride in Fantasyland at Disneyland in Anaheim, California. Based on the 1951 animated Disney film of the same name, the attraction resides next to a second ride, the Mad Tea Party, based on a scene in that same adaptation.

Upon boarding a fiberglass caterpillar car, guests proceeded past the enormous sculpted vines and dandelions looming over the gravel garden before entering the grey, cavernous maw of the rabbit hole and plunging into darkness. Soon, the voice of Katheryn Beaumont reprising her role as Alice was heard through hidden speakers: "My adventures in Wonderland began when I followed the White Rabbit down the rabbit hole. All of a sudden, I fell! Down, down..."

Light returned as guests passed through a set of black crash doors and entered the attraction's first exhibit, the Upside-Down Room. This spacious black-light chamber, set within the home of the White Rabbit, was characterized by a plethora of stylized furniture fixed upside-down to the relatively low ceiling; the ceiling itself was painted to resemble a floor decorated with patterned rugs. Upon entering the scene, guests viewed their upside-down reflections in the circular mirror of a ceiling-bound dresser as Alice's voice was heard once again: "The next thing I knew, I was in the Upside-Down Room — with the floor where the ceiling should be." Passing under tables and chairs of varying designs, as well as flower vases, bookshelves, gas lamps, and even an occupied fish bowl, the White Rabbit was heard singing I'm Late before swinging upside-down into a doorway at the far end of the room with his trumpet in hand. Guests' caterpillar cars then performed a sharp turn into the opposite direction and continued toward a tall fireplace (the same one seen in the film as Alice descends the rabbit hole) complete with flickering fabric flames and a hanging, upside-down tea kettle.

Exiting the Upside-Down Room through the wall left of the fireplace, guests found themselves in the Oversized Room (referred to as "Through the Key Hole" on the attraction's original poster), a sixteen-foot-tall chamber set within the depths of the rabbit hole, where in the film Alice encountered the talking doorknob. This variation of the scene was quite different, however, as although the illusion of shrinking to a minuscule size was preserved by means of gargantuan furniture props, there was no glass table here as there was in the film — rather a giant flat of the Cheshire Cat situated atop an equally large footstool. As soon as guests entered the Oversized Room, Alice again intervened with a short narration, this time with a slight flavor of worry audible in her voice: "I was getting smaller, and smaller, and smaller!" Guests were carried toward the oversized footstool (to the left of which was a towering fifteen-foot flat of an armchair, and to the rear a massive table topped with a tea pot and tea cup) as the Cheshire Cat laughed ceaselessly above. As the cat's pupils were convex on his subtly recessed sclerae, his eyes appeared to stare guests down as they passed directly under him. Now beneath the footstool, guests' caterpillar cars swerved suddenly as the grinning feline appeared once more, swinging down from above the stool as a silhouette-like figure of smaller stature, his piercing yellow eyes still following their movement. Guests then advanced toward the huge brass doorknob (who spanned the entire back wall of the Oversized Room despite being fixed to a door in the film) peering down at them before continuing straight through his gaping key-hole mouth and into the next scene, the Garden of Live Flowers.

"And then, I found myself in a beautiful garden of live flowers," Alice explained as guests began traversing a leafy, vine-like surface embellishing the path of their caterpillars. Here, a wealth of larger-than-life anthropomorphic flowers — roses, violets, lilies, daffodils, pansies, and other flora — swayed gently in tune to the lyrics of All in the Golden Afternoon. All around were huge, hyper-stylized leaves and blades of grass rendered in many hues of green and turquoise propped against abstract, gold-tinted backdrops. It was in this section of the ride that the track began a long, gradual ascent to the second floor of the show building, a feature which allowed a concealed "dandy-lion" to shoot up from beneath the edge of the raised vine and roar at guests as their caterpillar cars approached the end of the garden. Veering toward the right, guests then passed through a set of doors disguised as foliage and made their way into the Tulgey Wood.

"Ooh! The Tulgey Wood... It certainly was brillig." The original iteration of the Tulgey Wood scene was very stark relative to what it would become in 1984, essentially being a series of enormous tree branches and their attached leaves set against a blank field of darkness. In keeping with the trend of gargantuan scenery, each strange bird and plywood parcel of vegetation located within the confines of this scene was rendered with intimidating proportions, despite the fact that in the film, Alice had grown back to her normal size well before becoming lost in the Tulgey Wood. Heard everywhere but never seen was the Cheshire Cat, reciting the first verse of Jabberwocky much as he does in the animated film. Upon entering the wood, guests first approached ten glowing pairs of red, cut-out eyes staring from the dark, whose pupils would "follow" each caterpillar car veering out of the way into a swift hairpin turn. Guests then continued toward an accordion owl (which raised and retracted its musical neck of bellows) resting below a gigantic wooden sign reading "TULGEY WOOD", on top of which was a perched spectacle bird. Ahead were the bird-cage bird (whose caged body contained two fluttering fledglings, both of which were actually kept in use after the 1984 overhaul), an expanding umbrella vulture, several honking horn ducks, and a pair of pencil woodpeckers perched near another oversized wooden sign, this one labeled "Mad Hatter". Now having reached the upper level of the ride building, guests passed through another camouflaged set of crash doors and into the attraction's final main exhibit.

"Suddenly I was on a table — at the stupidest tea party I've ever been to in all my life!" Guests now found themselves at the iconic Mad Tea Party, as evident by the jovial sounds of The Unbirthday Song and yet another wooden sign, this one marked "Tea Party" and pointing to the right. Just as with the previous Tulgey Wood, the Mad Tea Party scene was inconsistent with the ride's source material in that it was portrayed with gargantuan proportions, having guests literally on the massive tabletop as Alice's narration would suggest. The right-hand wall here was painted with the backs of chairs propped against the green hedge wall enclosing the party, while to the left was a giant fanciful flat of a tea pot in the middle of the table near a towering stack of four fully dimensional tea cups (each on its own saucer), all gyrating precariously. Navigating among the crockery, several cups of tea blocking guests' path swung out of the way before their caterpillar cars drew near to the edge of the table, beyond which were the Mad Hatter and the March Hare — both rendered as monstrously sized flats donning crazed expressions. Situated in front of a forced-perspective mural offering glimpses of a stone path leading into the distant woods and an array of hanging paper lanterns, the unhinged duo popped up suddenly to shout, "Move down, move down, move down!" as guests rounded the animated tower of tea cups and began down the other side of the table. One final character, the Dormouse, then lifted his head out of an enormous, flat sugar jar and drowsily commented, "Very very rude indeed..." before guests smashed straight through a tea pot and careened into a black void.

Immediately, guests were assaulted by a loud cymbal crash and a series of starburst patterns illuminated via strobe lights. Accompanied by the sounds of shattering glass and other clamor, Alice was heard gasping in shock before delivering her final, inconclusive narration: "Oh dear... How do I get out? Wha- I've lost my way!" Guests were then carried past a series of confusing, brightly colored directional signs (more or less the same ones seen in the film prior to the introduction of the Cheshire Cat) reading "Yonder," "Go Back," "This Way Out," and other useless instructions. All was silent for a brief interval before guests plowed through three consecutive sets of wooden doors, each one smaller than the previous and coupled with an identical Goofy yell (as voiced by Pinto Colvig) of increasingly higher pitch. A final fourth set of doors, painted entirely black save for a minimalist keyhole in the center, then parted to a different, especially outlandish scream as guests' caterpillar cars emerged from the show building. (This final yell in particular, from the 1951 Goofy short Hello Aloha, is still used in the attraction.) Navigating down the winding, vine-shaped ramp suspended amid the exterior garden, guests eventually reached the grey pavement at ground level and turned toward the unloading station. 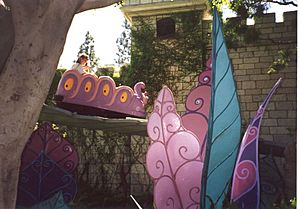 A guests riding the Alice in Wonderland ride in 1996.

Guests ride in caterpillar vehicles down the rabbit hole. Pieces of furniture, framed art, and vases swirl around as guests "fall" down the tunnel. As guests enter past the Doorknob, they see the White Rabbit#Disney film running off with Alice in pursuit. Guests then pass by Tweedle Dee and Tweedle Dum and encounter the White Rabbit, worrying about being late.

Next, the guests go through the garden of live flowers, who sing "All in the Golden Afternoon". Riders then pass the Caterpillar, who blows smoky letters and asks "Who are you?". The Tiger Lily replies, thinking that Alice and the riders are weeds and pouts in disgust, while a Dandelion pops up and roars. Next, guests enter the Tulgey Wood, where they and Alice meet the Cheshire Cat, as well as a pencil bird, an accordion owl, an eyeglasses bird, a horn-shaped duck with its ducklings, an umbrella bird, a cage bird, and a pair of hammer birds nailing signs to a tree. They then go through the hedge maze and past some singing playing-cards who are painting a white rose tree red, splashing nearby bushes with paint. The White Rabbit announces the Queen of Hearts (and the King) and she plays croquet, using a flamingo as a club and a hedgehog as a ball. The King tells the riders: "Rule 42: The Queen always wins" and the hedgehog ends up rolling into a rose tree. The guests then enter the Courtroom and the Queen orders their execution while a brigade of playing-cards leap towards the guests. Riders escape by pushing their way through the courtroom doors past two guards poised to attack.

The vehicles then leave the ride building's second floor and descend down a winding path on a giant vine past the ride queue, before heading to the final scene at the Mad Tea Party. After the Mad Hatter and March Hare sing "A Very Merry UnBirthday", Alice proclaims that it's her unbirthday too. The White Rabbit ducks as a giant unbirthday cake with a dynamite candle explodes and the ride vehicles exit to the unload area.

All content from Kiddle encyclopedia articles (including the article images and facts) can be freely used under Attribution-ShareAlike license, unless stated otherwise. Cite this article:
Alice in Wonderland (Disneyland attraction) Facts for Kids. Kiddle Encyclopedia.