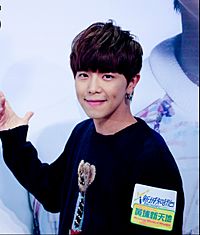 Alien Huang (traditional Chinese: 黃鴻升; simplified Chinese: 黄鸿升; pinyin: Huáng Hóng Shēng; 28 November 1983 – 16 September 2020), also known as Xiao Gui was a Taiwanese singer, actor, television presenter, illustrator and fashion designer. He was born in Taipei. He was known for presenting the television variety show 100% Entertainment. He also starred as Christopher in Already Famous (2011) and as A-hsien in Din Tao: Leader of the Parade (2012).

Huang was found dead with a head injury on 16 September 2020 in Taipei at the age of 36. The cause of death was a head injury caused by falling in the shower.

All content from Kiddle encyclopedia articles (including the article images and facts) can be freely used under Attribution-ShareAlike license, unless stated otherwise. Cite this article:
Alien Huang Facts for Kids. Kiddle Encyclopedia.