Alison Jean Lester AM (born 17 November 1952) is an Australian author and illustrator who has published over 25 children's picture books and two young adult novels; The Quickstand Pony and The Snow Pony. In 2005 Lester won the Children's Book Council of Australia (CBCA) Picture Book of the Year for her children's book, Are We There Yet?: A Journey around Australia. Her books have been published worldwide.

Alison Lester was born at Foster in Victoria, Australia. She grew up on a farm overlooking the sea. She was educated at St Margaret's School in Berwick, Victoria, where she stayed as a boarder. She achieved a higher diploma in teaching at The Melbourne Teacher's College, where she trained as a secondary arts and crafts teacher.

Lester taught for a while before starting a family and writing. Her first book was published in 1986. 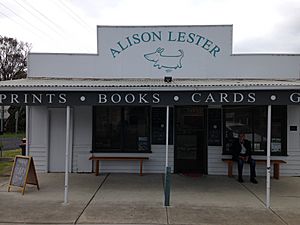 Lester lives and works in South Gippsland, Victoria. She has a gallery and bookshop in Fish Creek.

She visits primary schools as a guest speaker. Her picture books mix imaginary worlds with everyday life, encouraging children to believe in themselves and celebrate the differences that make them special.

1996, received Writers Project Grant from the Australia Council to research the Spanish Riding school in Vienna

2002, visiting author at the Bologna Book Fair, Italy, sponsored by the Australia Council

2005, workshops and exhibition of Are We There Yet? in Japan as part of the Asialink literature touring program with the Aichi expo

2005, photographer on tourist ship to Ross Sea region of Antarctica

2006, Are We There Yet? illustrations exhibited in Taipei

2006, first painting for the Kid's Antarctic Art project exhibited at the Tasmanian Museum and Art Gallery

2007, visual artist on two voyages to Peninsula region of Antarctica.

2007, photographer and writer on voyage around Spitsbergen in the Arctic.

Lester has written a series of picture books about seven children and their favourite things. This series of books is very popular among young children.[1] The books have been published in many different languages. The titles are: When Frank Was Four, Tessa Snaps Snakes, Rosies Sips Spiders, Clive Eats Aligators, Ernie Dances To The Didgeridoo and Celeste Sails to Spain.

Some of her other well known books include; Imagine, The Journey Home, "Kissed by the Moon", Noni the Pony and Magic Beach. Both The Quicksand Pony and The Snow Pony became best-sellers in Australia..

Lester's books have received many honours. Her picture book, Clive Eats Alligators was commended in the Australian Picture Book of the Year Awards 1986, Ernie Dances to the Didgeridoo was short-listed in 2000 for the same award and her experience-based picture book, The Journey Home, was honoured by the judges in 1990. Her novel, The Quicksand Pony, was named a CBCA Notable Book in 1997. [2]

All content from Kiddle encyclopedia articles (including the article images and facts) can be freely used under Attribution-ShareAlike license, unless stated otherwise. Cite this article:
Alison Lester Facts for Kids. Kiddle Encyclopedia.