Alna is a town in Lincoln County, Maine, United States. The population was 709 at the 2010 census. Alna is home to the Wiscasset, Waterville and Farmington Railway Museum and is noted for its historic architecture, including the early mill village of Head Tide. 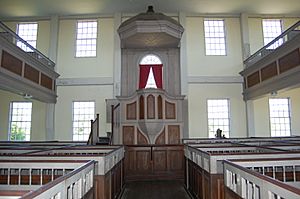 Pulpit at the Alna Meeting House

Originally a part of old Pownalborough, the town was settled around 1760 and incorporated in 1794 by the Massachusetts General Court as New Milford. But residents didn't like the name, so it was changed in 1811 to Alna, Latin for alder, the tree which grows in profusion along the banks of the Sheepscot River.

Alna was the site of the first fish hatchery in Maine, started shortly after the Civil War. Between 1895 until 1933, Sheepscot Station was a stop on the narrow gauge Wiscasset, Waterville & Farmington Railway, which is now a heritage railway in town.

The town in crossed by Maine State Route 194 and Maine State Route 218. It borders the towns of Wiscasset to the south, Dresden to the west, Pittston, Whitefield and Jefferson to the north, and across the Sheepscot River, Newcastle to the east.

There were 295 households, of which 28.1% had children under the age of 18 living with them, 60.0% were married couples living together, 6.8% had a female householder with no husband present, 4.4% had a male householder with no wife present, and 28.8% were non-families. 21.0% of all households were made up of individuals, and 6.7% had someone living alone who was 65 years of age or older. The average household size was 2.40 and the average family size was 2.78. 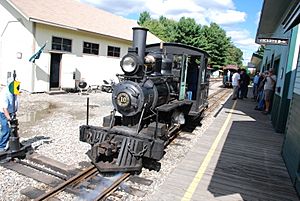 All content from Kiddle encyclopedia articles (including the article images and facts) can be freely used under Attribution-ShareAlike license, unless stated otherwise. Cite this article:
Alna, Maine Facts for Kids. Kiddle Encyclopedia.