Amos is a town in northwestern Quebec, Canada, on the Harricana River. It is the seat of Abitibi Regional County Municipality.

Amos is the main town on the Harricana River, and the smallest of the three primary towns — after Rouyn-Noranda and Val-d'Or — in the Abitibi-Témiscamingue region of Quebec.

Its main resources are spring water, gold and wood products, including paper.

In 2012, Quebec Lithium Corp. re-opened Canada's first lithium mine, which had operated as an underground mine from 1955–65. They are planning to carve an open pit mine over pegmatite dikes. Access to the mine is via paved road from Val d'Or.

The smaller communities of Lac-Gauvin and Saint-Maurice-de-Dalquier are also within the municipal boundaries of Amos. 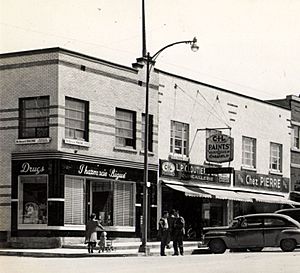 Rupert's Land, in which Abitibi was located, was owned by the Hudson's Bay Company and was bought by Canada in 1869. Abitibi itself was then annexed to the province in Quebec on June 13, 1898 by an act of the Federal Parliament.

Amos was the first colonization point for the region of Abitibi, with colonization beginning in 1910. The municipality was established in 1914 while the city itself was chartered in 1925. The name of the city came from the maiden name of the wife of Sir Lomer Gouin, then premier of Quebec.

A related municipality was created in 1917 under the name 'Municipalité de la partie ouest des cantons unis de Figuery et Dalquier' (Municipality of the western part of the united townships of Figuery and Dalquier) which changed its name to Amos-Ouest in 1949. In 1974 the municipality fused with the city of Amos proper.

Another related municipality was created in 1918 under the name 'Municipalité de la partie est des cantons Figuery et Dalquier' (Municipality of the eastern part of the united townships of Figuery and Dalquier), which also changed its name later 1950 to Amos-Est. The municipality was finally integrated into the city of Amos itself in 1987.

All content from Kiddle encyclopedia articles (including the article images and facts) can be freely used under Attribution-ShareAlike license, unless stated otherwise. Cite this article:
Amos, Quebec Facts for Kids. Kiddle Encyclopedia.