Amrita Sher-Gil (30 January 1913 – 5 December 1941) was an renowned Hungarian-Indian painter, she has been called "one of the greatest innovative women artists of the early 20th century" and a "pioneer" in modern Indian art.

Drawn towards painting since a young age, Sher-Gil started getting formal lessons in the art, at the age of eight. She first gained recognition at the age of 19, for her oil painting titled Young Girls (1932). She also had a a passion for reading and was a pianist.

During her life she traveled to various countries including Turkey, France, and India, deriving heavily from their art styles and cultures.

Sher-Gil is considered an important painter of 20th-century India, whose legacy stands on a level with that of the pioneers from the Bengal Renaissance. Sher-Gil's paintings are among the most expensive by Indian women painters today, although few acknowledged her work when she was alive.

In 1941, at age 28, just days before the opening of her first major solo show in Lahore, she became seriously ill and slipped into a coma leaving behind a large volume of work (her last work was left unfinished by her just prior to her death). She later died around midnight on 5 December 1941. The reason for her death has never been discovered. Amrita was cremated on 7 December 1941 at Lahore. 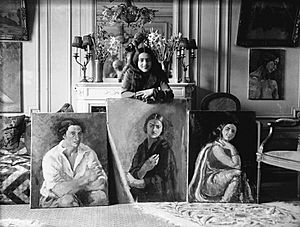 Amrita Sher-Gil with three of her paintings

Sher-Gil's art has influenced generations of Indian artists and her depiction of the plight of women has made her art a beacon for women at large both in India and abroad. Sher-Gil was sometimes known as India's Frida Kahlo because of the "revolutionary" way she blended Western and traditional art forms.

The Government of India has declared her works as National Art Treasures, and most of them are housed in the National Gallery of Modern Art in New Delhi, some of her paintings also hang at the Lahore Museum. Her work is deemed to be so important to Indian culture that when it is sold in India, the Indian government has stipulated that the art must stay in the country – fewer than ten of her works have been sold globally.

A postage stamp depicting her painting 'Hill Women' was released in 1978 by India Post, and the Amrita Shergil Marg is a road in Lutyens' Delhi named after her.

All content from Kiddle encyclopedia articles (including the article images and facts) can be freely used under Attribution-ShareAlike license, unless stated otherwise. Cite this article:
Amrita Sher-Gil Facts for Kids. Kiddle Encyclopedia.