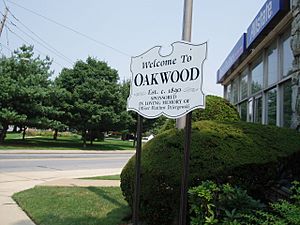 Oakwood Welcome Sign with Amundsen Circle in the background

The neighborhood has a coastline on the Lower New York Bay; the coastal area is sometimes referred to as Oakwood Beach, and is the site of a sewage treatment facility. Bordering this facility on the south is the Staten Island Unit of the Gateway National Recreation Area, also known locally (and formerly, officially) as Great Kills Park.

Oakwood's ZIP Code is 10306, the post office serving it being located in New Dorp, the community's northern neighbor.

Dominated by farmland in the heights area, and an ocean resort in the beach area until the mid-20th Century, Oakwood started suburbanization when a subway line was proposed between Brooklyn and Staten Island, and it underwent rapid suburbanization after the Verrazano-Narrows Bridge opened in November 1964. Today, Oakwood is a middle-class neighborhood of one- and two-family homes and garden apartments, with important commercial establishments along Hylan Boulevard.

Oakwood Beach underwent massive damage during Hurricane Sandy in late October 2012. A year later, due to the damage, former residents of the town were given the choice to sell their property and if they accept, the town will no longer be inhabited again and it will be used as a buffer zone.

Points of interest located in Oakwood include Monsignor Farrell High School and a string of cemeteries on the neighborhood's southwest side, most notably Frederick Douglass Memorial Park, an African-American burial ground — a curious anomaly as very few African-Americans actually reside in Oakwood or any of the neighborhoods that surround it. Historic Richmond Town lies immediately to the west.

The greenbelt woods located along Riedel Avenue have some concrete artifacts (such as a piece of sidewalk located near the pond at Riedel and Thomas Street), and pieces of the Great Depression can be occasionally found along the trails, such as bricks or chimneys or foundations of houses that were once located in the area, when it was still rural. The trails along Riedel Avenue also contain large boulders dropped off from glacial retreat during the ice age (though many are painted red due to vandals).

Amundsen Circle (officially the Captain Roald Amundsen Plaza) is a traffic circle and 1.05-acre (4,200 m2) park bounded by Amboy Road, Clarke Avenue and Savoy Street. Amundsen Circle and the 4.5-mile (7.2 km) Amundsen Trail for joggers both commemorate explorer Roald Amundsen. The park was acquired by the city in 1928, and named on 1929-07-09. In the park, there is a stone plaque, erected in 1933, when there was a large Norwegian population in Oakwood, by the Norsemen Glee Club of Staten Island and the Norwegian Singing Society of Brooklyn. The park is currently maintained by the Richmond Ever-Green Garden Club.

The community's station on the Staten Island Railway is Oakwood Heights. The area's bus service is provided by the S57, S76, S78, S79, S86.

All content from Kiddle encyclopedia articles (including the article images and facts) can be freely used under Attribution-ShareAlike license, unless stated otherwise. Cite this article:
Oakwood, Staten Island Facts for Kids. Kiddle Encyclopedia.