Anastasia of Sirmium facts for kids 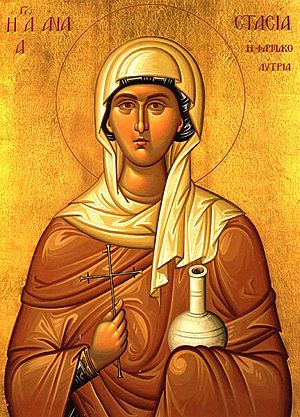 A modern icon of Saint Anastasia

Anastasia of Sirmium or Saint Anastasia was a Christian saint and martyr from the 4th century. She died at Sirmium in the Roman province of Pannonia Secunda. Today that place is in the modern country of Serbia. Little is known about her life. Most stories about her began many years after her death. Some stories say she was a Roman. Others say she was born in Sirmium. Roman Catholic tradition states that her mother was St. Fausta of Sirmium. She is venerated as a healer and an exorcist. Her relics lie in the Cathedral of St. Anastasia in Zadar, Croatia. She is one of seven women, along with the Blessed Virgin Mary, who were mentioned by name in the Mass.

Her feast day is December 22 in the Eastern Orthodox Church church. It is January 15 in the Roman Catholic Church.

All content from Kiddle encyclopedia articles (including the article images and facts) can be freely used under Attribution-ShareAlike license, unless stated otherwise. Cite this article:
Anastasia of Sirmium Facts for Kids. Kiddle Encyclopedia.