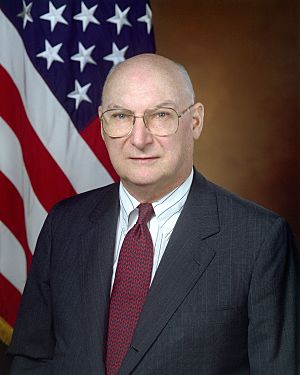 Andrew W. Marshall (September 13, 1921 – March 26, 2019) was an American foreign policy strategist. He served as director of the United States Department of Defense's Office of Net Assessment from 1973 to 2015. He was put into this role by President Richard Nixon. He stayed as director until his retirement on January 2, 2015. He was born in Detroit, Michigan.

All content from Kiddle encyclopedia articles (including the article images and facts) can be freely used under Attribution-ShareAlike license, unless stated otherwise. Cite this article:
Andrew Marshall (foreign policy strategist) Facts for Kids. Kiddle Encyclopedia.