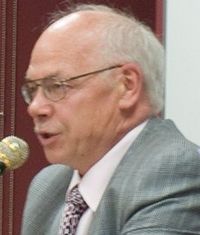 Andrew Telegdi, PC (András Telegdi; May 28, 1946 – January 23, 2017) was a Hungarian-born Canadian politician. He was a Liberal Member of Parliament in the Canadian House of Commons from 1993 to 2008, representing Waterloo and the successor riding of Kitchener—Waterloo.

Telegdi was born in Budapest, Hungary. He studied at the University of Waterloo in the 1970s. Telegdi died on January 23, 2017 in Waterloo, Ontario, aged 70.

All content from Kiddle encyclopedia articles (including the article images and facts) can be freely used under Attribution-ShareAlike license, unless stated otherwise. Cite this article:
Andrew Telegdi Facts for Kids. Kiddle Encyclopedia.