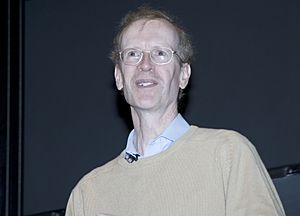 Sir Andrew John Wiles, KBE, FRS (born Cambridge, 11 April 1953) is an Abel Prize-winning British mathematician and a Royal Society Research Professor at Oxford University. He specializes in number theory. He is most famous for proving Fermat's Last Theorem. He is a foreign member of the United States National Academy of Sciences since 1996.

The proof of Fermat's Last Theorem

In the summer of 1986, Wiles decided to prove the theorem. Gerhard Frey, Jean-Pierre Serre and Ken Ribet had done successful research in the last few years. Wiles realised that he could prove a limited form of the modularity theorem. So, he decided to solve this problem. This was done somewhat secretly. In 1993, he presented his proof to the public for the first time at a conference in Cambridge. In August 1993, however, it turned out that the proof contained a gap. Wiles tried to fill in this gap. But the error he made was a very basic one. Wiles got the crucial idea for avoiding, rather than closing this gap. This came to him on 19 September 1994. Together with his former student Richard Taylor, he published a second paper. This avoided the error and thus completed the proof. Both papers were published in 1995 in a special volume of the Annals of Mathematics.

Recognition by the media

All content from Kiddle encyclopedia articles (including the article images and facts) can be freely used under Attribution-ShareAlike license, unless stated otherwise. Cite this article:
Andrew Wiles Facts for Kids. Kiddle Encyclopedia.