"Angry white male" is an insult for white men holding conservative or right-wing views. The term is often used when talking about the politics of the United States.

The term mostly refers to a group which emerged in the early 1990s. They reacted to what they thought were injustices by the "affirmative action" quotas in the workplace. Such people are not necessarily Nazis or extremists. 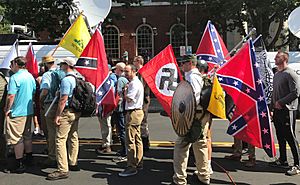 Protesters at the Unite the Right rally in Charlottesville, Virginia. They are holding flags from the Confederacy and Nazi Germany, which are seen as symbols of white supremacy and racism

An angry white male is supposed to be opposed to anti-discrimination policies (such as affirmative action) that benefit racial minorities and women. Supporters of Donald Trump are sometimes said to be angry white men.

The term "angry white male" is also used in Australia to talk about men who do not like feminism.

The term is used for those believed to be opposed to the Civil Rights Movement and second-wave feminism.

All content from Kiddle encyclopedia articles (including the article images and facts) can be freely used under Attribution-ShareAlike license, unless stated otherwise. Cite this article:
Angry white male Facts for Kids. Kiddle Encyclopedia.