Kids Encyclopedia Facts
In this article, the patronymic is Vladimirovna and the family name is Blinkova .

Blinkova was runner-up at the 2015 Wimbledon Championships in girls' singles and was ranked the No. 3 junior tennis player in the world in August 2015.

She won her first main-draw match in a WTA Tour tournament at the Kremlin Cup in October 2016, and her first Grand Slam appearance was at the 2017 Australian Open, where she won her first-round match against Monica Niculescu. At the 2019 US Open, she took defending champion and top seed Naomi Osaka to three sets.

Anna Blinkova was born on 10 September 1998 in Moscow to mother Elena and father Vladimir. During childhood, she played both tennis and chess to a high level. She prefers playing on hardcourts. Her favourite shot is forehand. She speaks Russian, Slovak, French and English.

Blinkova is former junior world No. 3 player. She was runner-up at the 2015 Wimbledon in girl's singles, where she lost to compatriot Sofya Zhuk. 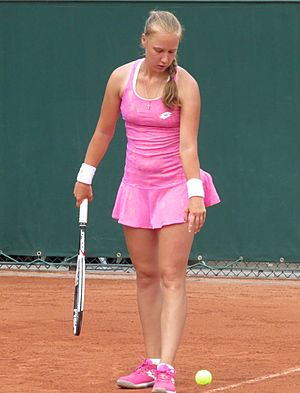 Blinkova at the 2017 French Open qualifications 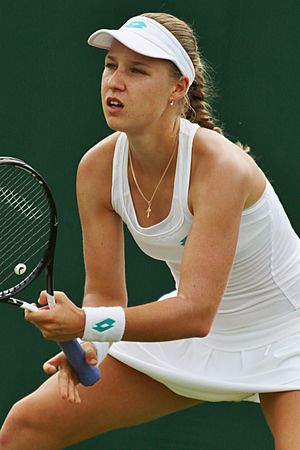 Blinkova at the 2019 Wimbledon

In February 2018, she reached the third round of the Premier 5 Qatar Open, defeating Elena Vesnina and Kristina Mladenovic, before she lost to world No. 7, Caroline Garcia. In May, she won her first WTA doubles title at the Morocco Open, partnering with Raluca Olaru. Blinkova entered top 100 for the first time in both singles and doubles in 2018.

At the 2019 French Open, she reached third round after the major win over Caroline Garcia, but then lost to Madison Keys. In August, she reached her first WTA Tour quarterfinal in singles at the Bronx Open, where she lost to Wang Qiang. She followed this with title in New Haven at the WTA Challenger. Nearly after that, she reached semifinal of the Guangzhou Open, but then lost to Sofia Kenin. In October, she reached another semifinal at the Luxembourg Open, but lost to later champion Jeļena Ostapenko. During the year, she done even better in doubles. In February, she won the Hua Hin Championships, alongside Wang Yafan. After that, she reached semifinal of the Hungarian Open. In April, she reached another semifinal at the Premier-level Stuttgart Open. She then won $60K, $80K and $100K events, respectivelly, on the ITF Circuit. In September, she won the WTA Challenger New Haven.

Blinkova continued to made better results in doubles than singles. Despite not producing good results in singles during the season, Blinkova started year with her first career top 10 win, defeating Belinda Bencic in the first round of the Shenzhen Open. In singles, her best result of the year came at the Italian Open, where she reached the third round, but then lost to world No. 4, Karolína Plíšková. In doubles, her first significant result came in March at the Indian Wells Challenger, where she reached the semifinal. Then, six month absence of the WTA Tour happened due to COVID-19 pandemic outbreak. When tennis came back in August, she first played at the Top Seed Open, where she reached the semifinal. She followed this with quarterfinal of the Cincinnati Open, alongside Veronika Kudermetova. Things then went even better at the US Open, where Blinkova and Kudermetova reached the semifinal. They lost to eventual champions Laura Siegemund/Vera Zvonareva.

Current after the 2021 Wimbledon Championships.

During the years, Blinkova is climbing more and more on the money ranking list. As of the January 2021, she is ranked as 315th player with most career-earned money.[citation needed]

All content from Kiddle encyclopedia articles (including the article images and facts) can be freely used under Attribution-ShareAlike license, unless stated otherwise. Cite this article:
Anna Blinkova Facts for Kids. Kiddle Encyclopedia.