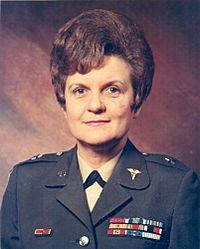 Hays served as Chief of the U.S. Army Nurse Corps from 1967 through 1971. She was the first woman in the U.S. Armed Forces to be promoted to a general officer rank. In 1970, she was promoted to the rank of Brigadier General. She received two Legion of Merit.

All content from Kiddle encyclopedia articles (including the article images and facts) can be freely used under Attribution-ShareAlike license, unless stated otherwise. Cite this article:
Anna Mae Hays Facts for Kids. Kiddle Encyclopedia.