Annaghdown (Irish: Eanach Dhúin, IPA:[ˈanˠəxˈɣuːnʲ]) is a parish in County Galway, Ireland. It takes its name from Eanach Dhúin, Irish for "the marsh of the fort". The village lies around Annaghdown Bay, an inlet of Lough Corrib. The parish is situated in the Archdiocese of Tuam (Roman Catholic) and the Diocese of Tuam, Killala and Achonry (Church of Ireland).

According to the Early Ecclesiastical Settlement Names of County Galway (1996):

"The name Eanach Dhúin signifies the 'marsh of the Dún or fort.' The word Dún is one of the most common elements denoting secular settlement in early placenames. It usually refers to an enclosed settlement or ringfort and in the early historical period it appears to designate the principal dwelling of the local king or chieftain. The placename ... probably referred to the marshlands attached to the fort of the chieftain of Maigh Seola, which would have been granted as a site for a church." 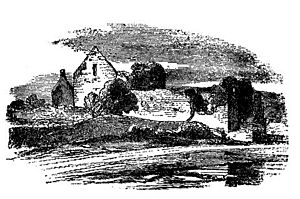 Illustration of Monastic Ruins at Annaghdown

Little is known of the early history of Annaghdown, which does not appear in the annals until the twelfth century. Two historical sources state it was granted to St. Brendan of Clonfert by King Áed mac Echach of Connacht. Francis Byrne believed that as Áed's territory of Uí Bhriúin Aoi lay in County Roscommon, it was not within his power to grant the land of another chieftain so distant from him. However, as noted by Hubert Knox, the dynasty may have actually originated in this region, which would explain this donation.

The earliest reliable reference to Annaghdown occurs in Comainmniguid Noem nErenn, composed c. 800, which contains a reference to Ciarán Enaigh Dúin, (Ciarán of Annaghdown). This, together with placename evidence indicates an association with Ciarán of Clonmacnoise as opposed to Brendan of Clonfert. The connection with Clonfert may have been no more than a reflection of an attempt by Clonfert to justify its claim on the church of Annaghdown at a later period.

In the 12th century the diocese of Annaghdown was established. Although not listed in the Synods of Rathbreasail or Kells, Annaghdown diocese survived nonetheless for many centuries through monastic outreach from Annaghdown Abbey. The title Bishop of Annaghdown is known to have been in use from c. 1189. Several bishops, from 1189 to 1485, were systematically elected by its 'Cathedral Chapter' and, despite many counterclaims from Tuam, some were approved by Rome. 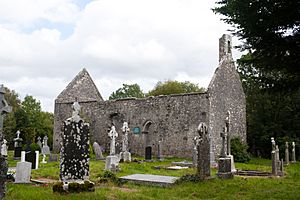 In 1410, Áedh Ó Flaithbheartaigh financed the building of a church at Annaghdown.

In 1485, when the Wardenship of Galway was created, Annaghdown was formally united with Tuam by Papal decree, and some of its parishes, Claregalway, Moycullen and Shrule, were formally attached to the new wardenship. However, the title still survives as Bishop of Eanach Dúin, currently held by Bishop Octavio Cisneros, Auxiliary Bishop of New York, since 2006.

The ruins of Annaghdown Abbey and the 15th century cathedral survive as a National Monument.

Annaghdown Castle was erected by the O'Flahertys in the late 14th century, on the east shore of Lough Corrib, where it still stands, now restored.

On Thursday, 4 September 1828, 20 people travelling to Galway on the Caisleán Nua were drowned when a sheep put its foot through the floor of the boat. This tragedy later became the subject of a famous lament, Eanach Dhúin, composed by the famous blind Irish poet, Antoine Ó Raifteiri. A memorial stone was erected at Annaghdown Pier in 1978 by the Annaghdown Anglers Club, 150 years after the tragedy occurred. 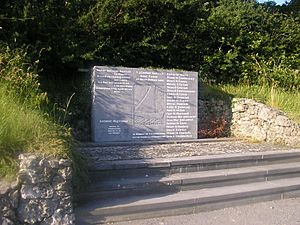 Memorial at Annaghdown Pier, erected in 1978 in memory of those drowned in 1828

The Connacht Journal of 4 September reported the following:

An old row-boat in a rotten and leaky condition, started from Annaghdown early in the morning, a distance from Galway up Lough Corrib of about eight miles, having, it is calculated, about 31 persons on board, who were coming to the fair of Galway; the boat and passengers proceeded without obstruction until they arrived opposite Bushy Park within two miles of Galway, when she suddenly went down and all on board perished except about 12 persons who were fortunately rescued from their perilous situation by another boat. Eighteen of the bodies of these unhappy creatures were taken out of the lake in the course of the day and presented a most heart-rending scene, being surrounded by their friends who came to identify them, and by whom they were removed in a boat to Annaghdown.

The boat was in such an unsound state as to render her unfit for the passage. The unfortunate accident happened by a sheep putting its leg through one of the planks, which produced a leak, in order to stop which one of the passengers applied his great coat to the aperture and stamped it with his foot. In doing so he started one of the planks altogether, which caused the boat's immediate sinking, having been overloaded; ten sheep, a quantity of lumber, and about 31 persons being on board.

Eighteen of the bodies have been found; 12 have escaped, and one is missing. Major Dickson and a party of the 64th Regiment attended and rendered every humane assistance in their power. An inquest was held on the bodies by John Blakeney Esq., Coroner, at which James O'Hara, Esq., M.P., and J. H. Burke, Esq., Mayor, attended, and the jury returned a verdict of "accidental drowning".

It is said that two more were drowned and their bodies were later discovered: Thomas Cahill and Mary Ruane, making a total of 20. John Cosgrove saved two women, but was drowned in trying to save the third. He was a lime-burner by trade. The remains of his house are still to be seen in the Blake estate - "Teach Chosgardha". Raftery's poem seems to be in error in mentioning only 19 victims.

Annaghdown has Gaelic football, hurling and soccer clubs. The local GAA club, Annaghdown GAA, is a sporting club which caters for both hurling and Gaelic football. The playing fields and clubhouse are located in Cregg townland, on the road linking Cloonboo, on the N84, to Knockdoe, on the N17.

This poem was composed by the travelling Irish poet, Antoine Ó Raifteiri, as a lament of the twenty people drowned at Menlo, Galway, on 4 September 1828.

Irish songwriter Dick Farrelly wrote the song, "Annaghdown". The song was recorded by Sinead Stone & Gerard Farrelly on the album, "Legacy of a Quiet Man". Farrelly is best remembered for his song Isle of Innisfree, theme of the film, "The Quiet Man".

All content from Kiddle encyclopedia articles (including the article images and facts) can be freely used under Attribution-ShareAlike license, unless stated otherwise. Cite this article:
Annaghdown Facts for Kids. Kiddle Encyclopedia.