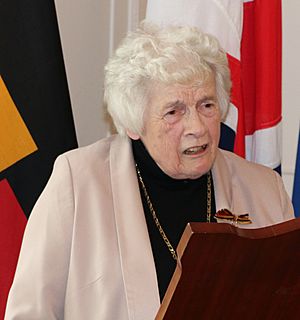 Anthea Bell OBE (10 May 1936 – 18 October 2018) was an English translator. She was born in Suffolk and went to Somerville College, Oxford. She translated many literary works, especially children's literature, from French, German and Danish. These include Austerlitz by W. G. Sebald, the Inkworld trilogy by Cornelia Funke and the French Asterix comics along with co-translator Derek Hockridge.

Bell died on 18 October 2018 from complications of Alzheimer's disease at the age of 82.

All content from Kiddle encyclopedia articles (including the article images and facts) can be freely used under Attribution-ShareAlike license, unless stated otherwise. Cite this article:
Anthea Bell Facts for Kids. Kiddle Encyclopedia.