Kids Encyclopedia Facts
Not to be confused with his uncle of the same name but better known as Antioh Cantemir. 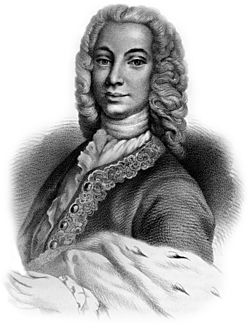 A portrait of Kantemir

Antiochus or Antioch Kantemir or Cantemir (Russian: Антиох Дмитриевич Кантемир, Antiokh Dmitrievich Kantemir; Romanian: Antioh Cantemir; Turkish: Antioh Kantemiroğlu; French: Antioche Cantemir; 8 September 1708 – 31 March 1744) was a Moldavian who served as a man of letters, diplomat, and prince during the Russian Enlightenment. He has been called "the father of Russian poetry".

Kantemir was born into a noble Moldavian family at Iaşi on 8 September 1708. His illiterate grandfather Constantin had been made voivode of Moldavia by the Ottomans in 1685 and was succeeded by his well-educated sons Antioch and Demetrius. Kantemir was the son of Demetrius by his wife, the Princess Kassandra Cantacuzene, who claimed descent from the Byzantine dynasty of the same name. He spent much of his youth in Constantinople as a hostage to the Turks. He was then educated by his father and at the St Petersburg Academy before moving to the family estate near Dmitrovsk.

He served as the Russian ambassador at London from 1731 to 1736, when he was relocated to Paris to serve as Russia's minister plenipotentiary to the Kingdom of France. There, he became a noted intellectual and a close friend of Montesquieu and Voltaire. Kantemir died a bachelor in Paris amid litigation concerning his illegitimate children.

Considered "the father of Russian poetry", Kantemir used his classical education to assist Peter the Great's programme of modernizing and westernizing Russian culture. His most noticeable effort in this regard is his Petrida, an unfinished epic glorifying the emperor. He produced a tract on old Russian versification in 1744 and numerous odes and fables. His use of gallic rhyme schemes can make his work seem antiquated and awkward to modern readers.

He edited his father's History of the Growth and Decay of the Ottoman Empire in England and wrote a biography and bibliography of his father which later accompanied its 1756 edition. His 1742 Letters on Nature and Man (O Prirode i Cheloveke) was a philosophical work. He is best remembered for his satires in the manner of Juvenal, including To My Mind: On Those Who Blame Education and On the Envy and Pride of Evil-Minded Courtiers, which were among the first such works in the Russian language.

Kantemir translated Horace and Anacreon into Russian, as well as Algarotti's Dialogues on Light and Colors. His 1740 translation of De Fontenelle's Conversations on the Plurality of Worlds was partly censored as heretical. His own works were translated into French by the Abbé Guasco, who also penned his biography.

All content from Kiddle encyclopedia articles (including the article images and facts) can be freely used under Attribution-ShareAlike license, unless stated otherwise. Cite this article:
Antiochus Kantemir Facts for Kids. Kiddle Encyclopedia.