As a young man, he attended the Academy of St. Cyr and the Royal Cavalry School at Saumur in the 1830s, before serving two to three years as a lieutenant in the French Cavalry. 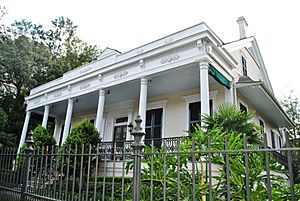 During the American Civil War, he was a colonel in the 10th Louisiana Infantry ('French Brigade', 'French Legion') and served in Virginia.

He resided for much of his life in St. Tammany Parish, on the north shore of Lake Pontchartrain. In the 1870 U.S. Census, he is listed there in the community of Lewisburg.

All content from Kiddle encyclopedia articles (including the article images and facts) can be freely used under Attribution-ShareAlike license, unless stated otherwise. Cite this article:
Antoine James de Marigny Facts for Kids. Kiddle Encyclopedia.