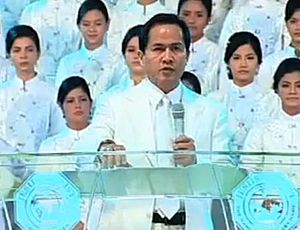 Apollo Carreón Quiboloy is the founder and leader of the Philippines-based Restorationist church called the Kingdom of Jesus Christ, Inc. He has made claims that he is "The Appointed Son of God".

Quiboloy was born on April 25, 1950 in the foothills of Mt. Apo in Davao City, and is the youngest of nine children of Kapampangans José Quiboloy y Turla and María Carreón y Quinto (born December 28, 1913). Both his parents were natives of Lubao, Pampanga, and had migrated to Davao following the end of the Second World War to find better jobs.

Quiboloy was a member of the United Pentecostal Church until he established the Kingdom of Jesus Christ church.

All content from Kiddle encyclopedia articles (including the article images and facts) can be freely used under Attribution-ShareAlike license, unless stated otherwise. Cite this article:
Apollo Quiboloy Facts for Kids. Kiddle Encyclopedia.