Wallet displays Aztec, PDF417, and QR 2D barcodes and Code 128 1D barcodes beginning with iOS 9. Each digital coupon or ticket is known as a "pass". When the user launches Wallet for the first time, a brief introduction screen appears with a button inviting users to browse apps on the App Store with Wallet integration. Passes can also be distributed online via Safari, sent to the user via email, or scanned using the built-in scanner in Wallet.

Passes are synced between iOS devices using iCloud, and OS X 10.8.2 and later also support opening passes to be sent to users' iOS devices. Although the app is available in iOS 6 or later, it is only available on iPhone and iPod Touch, but not on iPad.

Wallet has the following features:

Several third party developers have created similar apps for other operating systems, such as Pass2U Wallet or PassWallet for Android and BlackBerry, that support importing and viewing Wallet passes. Windows Phone 8.1 also supports Apple's pass format as well, although dynamic updates are not supported. Some issuers of passes also support viewing the passes through any web browser.

Passes exist in a larger ecosystem, because passes are created as a package. The package is a pass template, that is created with a pass signer, along with relevant data and a private key. Passes can be updated at any time using the PassKit API and an iOS app can interact directly with passes stored in Wallet.

Passes are presented and managed by Wallet. Systems and apps interact with passes via the PassKit API.

In its simplest form, an interaction (or transaction) between a pass and a system is facilitated by a 2D Barcode or the modern QR code although it requires the customer to initiate the activity. 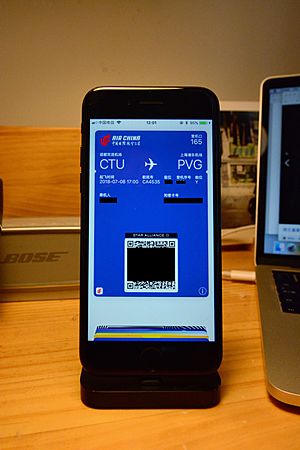 In late 2014, the first known implementations utilizing the iBeacon wireless geofencing started to appear in retail locations in the US. The iBeacon solutions allowed the retailer to broadcast an unsolicited lock-screen notice onto smartphones within Bluetooth range.

In 2015, Apple incorporated the ability to present a loyalty card in Wallet to a point-of-sale terminal via NFC. Walgreens enabled this first with their Balance Rewards loyalty program; customers can add their card to Wallet through the Walgreens or Duane Reade mobile apps and tap their phone to the terminal when prompted for their rewards card.

Passes can be distributed via email, SMS, MMS, social media, an app, and as QR codes.

All content from Kiddle encyclopedia articles (including the article images and facts) can be freely used under Attribution-ShareAlike license, unless stated otherwise. Cite this article:
Apple Wallet Facts for Kids. Kiddle Encyclopedia.