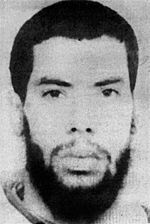 The Armed Islamic Group (GIA, from French Groupe Islamique Armé; Arabic الجماعة الإسلامية المسلّحة‎, al-Jama'ah al-Islamiyah al-Musallaha) was an Islamist terrorist organization based in Algeria. It wanted to overthrow the Algerian government and replace it with an Islamic state. The GIA adopted violent tactics in 1992 after the military government did not recognise the victory of the Islamic Salvation Front in the first round of elections held in December 1991. The Islamic Salvation Front was the largest Islamic opposition party at the time.

Between 1992 and 1998 the GIA led a violent campaign. They killed many civilians. Sometimes they wiped out entire villages in its area of operation (see List of Algerian massacres of the 1990s; notably the Bentalha massacre and Rais massacre, among others). After announcing its campaign against foreigners living in Algeria in 1993, the GIA killed more than 100 foreign men and women in the country. The group used assassinations and bombings, including car bombs. The GIA was considered a terrorist organization by the governments of Algeria, France and the United States. Outside of Algeria, the GIA established a presence in France, Belgium, the UK, Italy and the United States.

All content from Kiddle encyclopedia articles (including the article images and facts) can be freely used under Attribution-ShareAlike license, unless stated otherwise. Cite this article:
Armed Islamic Group Facts for Kids. Kiddle Encyclopedia.