Arras Mountain is a 3,090-metre (10,138 ft) mountain summit located in the Canadian Rockies of British Columbia, Canada. Arras Mountain is situated immediately northeast of the confluence of Icefall Brook with Valenciennes River, 7.2 kilometers (4.5 miles) east-southeast of Rostrum Peak, and 6 km (3.7 mi) west of Valenciennes Mountain, and all are in the Kootenay Land District. The peak was named in 1921 to commemorate the World War I battlefield at Arras, France, where Canadian troops fought in the first battle April 1917, and in the second battle August 1918. The name was officially adopted in 1924 when approved by the Geographical Names Board of Canada.

Arras Mountain is composed of sedimentary rock laid down during the Precambrian to Jurassic periods. Formed in shallow seas, this sedimentary rock was pushed east and over the top of younger rock during the Laramide orogeny. The northwest aspect of the mountain conspicuously displays vertically-tilted anticlinal strata. Topographic relief is significant as the west aspect of the peak rises over 2,000 meters above Icefall Brook in less than two kilometers. 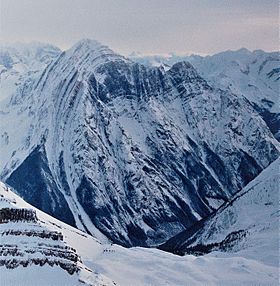 Based on the Köppen climate classification, Arras Mountain is located in a subarctic climate zone with cold, snowy winters, and mild summers. Temperatures can drop below −20 °C with wind chill factors below −30 °C. Precipitation runoff drains to Icefall Brook and Valenciennes River.

All content from Kiddle encyclopedia articles (including the article images and facts) can be freely used under Attribution-ShareAlike license, unless stated otherwise. Cite this article:
Arras Mountain Facts for Kids. Kiddle Encyclopedia.