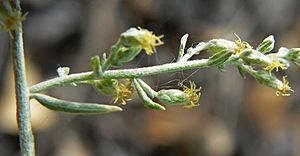 Ludoviciana is the Latinized version of the word Louisiana.

Artemisia ludoviciana is a rhizomatous perennial growing to heights between 0.33–1 metre (1.1–3.3 ft). The stems bear linear leaves up to 11 centimeters long. The stems and foliage are covered in woolly gray or white hairs.

The top of the stem is occupied by a narrow inflorescence of many nodding (hanging) flower heads. Each small head is a cup of hairy phyllaries surrounding a center of yellowish disc florets and is about half a centimeter wide.

The fruit is a minute achene.

The plant is native to North America where it is widespread across most of the United States, Canada, and Mexico. Some botanists suggest that eastern United States populations have been introduced from the western and central part of the continent.

Native Americans used the species as a medicinal plant, a source of fiber for crafting household items, and for ceremonial purposes. The Dakotas used this plant to protect against maleficent powers. The Apache, Chiricahua and Mescalero used this plant for spices while Blackfoot tribe used it as a drug for dermatological purposes. Gros Ventre also used it for skin curing as well as medicine against cold, because it also antipyretic.

Artemisia ludoviciana is cultivated as an ornamental plant. Being rhizomatous, it can spread aggressively in some climates and gardens.

All content from Kiddle encyclopedia articles (including the article images and facts) can be freely used under Attribution-ShareAlike license, unless stated otherwise. Cite this article:
Artemisia ludoviciana Facts for Kids. Kiddle Encyclopedia.