Since appearing in Red and Blue, they have made multiple appearances in Pokémon spin-offs, manga, and anime, notably in the film Pokémon The Movie 2000. They have also appeared in all core series games, though they are usually only obtainable through trade or transfer. Their appearances have received generally positive reception from critics.

The three birds, known as legendary Pokémon, are some of 151 different designs conceived by Game Freak's character development team and finalized by Sugimori for the first generation of Pocket Monsters games Red and Green, which were localized outside Japan as Pokémon Red and Blue. Originally called "Freezer", "Thunder", and "Fire" in Japanese, Nintendo decided to give the various Pokémon species "clever and descriptive names" related to their appearance or features when translating the game for western audiences as a means to make the characters more relatable to American children. Articuno's English name is a portmanteau of "Arctic" and "uno", the Spanish and Italian word for one, while Zapdos' name combines "zap" and dos, the Spanish word for two, and for Moltres, "molten" and tres, the Spanish word for three.

Articuno, the Freeze Pokémon, has brown eyes (red in the early anime and video games), blue plumage, a bluish-white-feathered chest, a three feathered crest adorning its head and a gray beak with matching legs. With its long, sparkling tail trailing behind, its flying form is magnificent. It can create and manipulate ice freely by freezing the moisture in the air. Its translucent wings are imbued with the essence of frigidity, and the flapping of its wings chills the air, causing the conversion of water particles in the air into snow or ice, causing snow to fall when it flies overhead. In legend, Articuno resides within the confines of icy mountains, because those who have seen it were often doomed explorers scaling such mountains, and therefore it is believed Articuno makes it a point to appear before them and save them.

Zapdos, the Electric Pokémon, may be based on the thunderbird. Zapdos has the form of a large bird with black and yellow plumage, with its spiky feathers make it look as if it were made of lightning. Its tail feathers stick out in several directions, furthering this illusion. A large crest of feathers decorates its head, and distinctive black rings encircle its eyes. Zapdos is always seen in conjunction with thunderstorms, because it gathers energy from the electricity in the atmosphere, and is said to live in such clouds. It also causes massive crackling and snapping sounds when it flies; these are contributed to the lightning bolts it is said to shed when airborne. 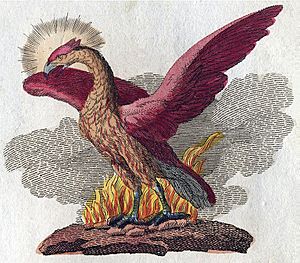 Moltres, the Flame Pokémon, is literally ablaze with fire, resembling a phoenix. It has flame-colored plumage, and its dazzling wings and elaborate head crest appear to be covered with flames. It has a straight, pointed brown break, which is the same color as its feet. It can freely create and manipulate fire, and when it flaps its wings, it creates a brilliant flash of flames. If its body is injured for any reason, it will head towards a volcano and dip its body in the molten magma to heal its wounds. When Moltres thinks it is in the least bit possible danger, it will summon a flash of fire and seemingly disappear, flying out of sight very fast. Moltres appear to live in hot regions, particularly active volcanoes. It appears to migrate to the south during the springtime, so it is said that its appearance will bring about an early spring.

The legendary birds first appeared in the Game Boy video games Pokémon Red and Blue and Pokémon Yellow. As rare Pokémon, they appear only once per game in a fixed location, and are difficult to defeat or capture. If they are defeated without capturing them, they disappear, and will never be seen again. They also appear in later core series games, including the Red and Blue remake Pokémon FireRed and LeafGreen, Pokémon HeartGold and SoulSilver, and Pokémon X and Y.

In the mobile app Pokémon Go, Team Mystic is represented by Articuno; Team Instinct, Zapdos; and Team Valor, Moltres. Following the first Pokémon GO Fest in July 2017, the legendary birds were released into the game and available via the raids feature.

In Pokémon Sword and Shield's expansion pack, The Crown Tundra, the legendary birds receive a Galarian Form that changes their appearance and types. Articuno changes from Ice/Flying to Psychic/Flying, Zapdos changes from Electric/Flying to Fighting/Flying, and Moltres changes from Fire/Flying to Dark/Flying.

The legendary birds play a central role in Pokémon: The Movie 2000 as objects of desire sought by the films' main antagonist, Lawrence III. In the beginning of the Battle Frontier challenge in the anime, Noland, the battle factory frontier brain had befriended one. After reuniting with their photographer friend Todd, Ash and his friends hear a rumor that Articuno lives on a certain mountain. After several encounters with Team Rocket, Ash and Todd are saved by Articuno from a snowstorm, and Todd manages to snap a picture of it. According to Team Rocket's imagination in the episode called "Numero Uno", Articuno would come to cool down their boss Giovanni because his area seems to be hot.

Articuno appears in the Magical Pokémon Journey manga, in The Legendary Articuno!, atop a mountain used by a ski resort. This Articuno is rumored to spirit away the lives of lost travelers, but in reality, it is a friendly Pokémon that runs a Snowcone shop. In Pokémon Adventures, Articuno was acquired by Team Rocket, and was used by Koga to try to finish Red and Blue and succeeded in freezing them. After Koga being defeated, it is called upon by Sabrina's Kadabra and merged with Zapdos and Moltres to form Zapmolcuno, a combination that proved almost unstoppable until Saur saved its trainers with a web created using Vine Whip and evolved to Venusaur to deliver the final blow with Charizard and Blasty. It at last regains its freedom after the defeat and splits from its fellow birds. Much later, it reappears under Green's possession with its fellow birds and is lent to Red in the battle against Will and Karen, who nearly overwhelmed the three with Ho-Oh and Lugia.

Zapdos plays small roles in the anime and manga. It is featured in Pokémon The Movie 2000 along with the other two Legendary birds, Articuno and Moltres. It appears that Zapdos communicates through electricity as it shocks Pikachu to communicate. Zapdos also appeared in the credits for Pokémon Ranger and the Temple of the Sea in which it was captured by Jackie.

In Pokémon Adventures, Lt. Surge appears with Zapdos in his team during the events of Volume 3, using it as a neverending power source for his Electric-types, until Red uses Saur's Razor Leaf to cut the supply cords. After having been merged with Articuno and Moltres, the three Pallet Town trainers are able to defeat the combined monster. Green later captures Zapdos and uses it against Will and Karen. During this battle, it is lent to Blue.

The first official appearance of Moltres in the anime was in "All Fired Up!" that marks the official opening of the Pokémon League, where it lights the torch which is equivalent to the real-life Olympic Torch at the Olympic Games. It also plays a role in Pokémon The Movie 2000: The Power of One, where it was one of the three birds that the villainous collector captured to allow him access to Lugia's power, but the upset of the balance that occurred as a result nearly caused a worldwide weather catastrophe as Moltres was driven to wage war with its two rivals. In a later episode of Pokémon Chronicles, Ritchie encountered a trainer named Silver who wanted to capture Moltres, battling him with his Salamence. Silver is interrupted by Team Rocket members Butch and Cassidy who attempt to kidnap Moltres. Ritchie and Silver team up to defeat them and rescue Moltres, although the firebird was badly weakened by the attack. Silver let Moltres go because he wanted to catch him in a fair fight when it was at full strength.

All content from Kiddle encyclopedia articles (including the article images and facts) can be freely used under Attribution-ShareAlike license, unless stated otherwise. Cite this article:
Articuno, Zapdos, and Moltres Facts for Kids. Kiddle Encyclopedia.