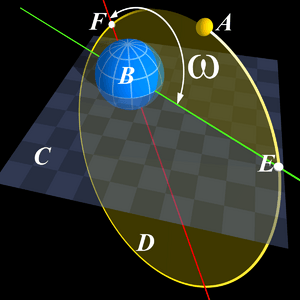 The ascending node (Ω) is one element of the orbital that must be specified to define the orientation of an elliptical orbit. The other orbital elements are inclination, and the argument of periapsis (ω).

The ascending node is usually quoted as the angular position at which a celestial body passes from the southern side of a reference plane to the northern side, hence ‘ascending’. For objects orbiting the Sun, the most convenient reference plane is the orbital plane of the Earth. In other systems, such as orbits of satellites around a planet, a more appropriate reference plane must be used.

All content from Kiddle encyclopedia articles (including the article images and facts) can be freely used under Attribution-ShareAlike license, unless stated otherwise. Cite this article:
Ascending node Facts for Kids. Kiddle Encyclopedia.