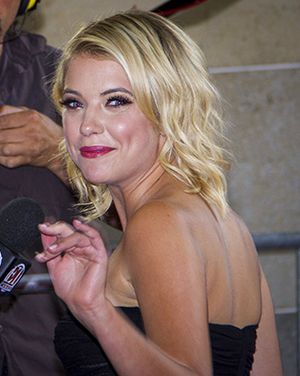 Ashley Victoria Benson (b. December 18, 1989 in Anaheim, California) is an American actress. She plays the character Abby Deveraux on the soap opera Days of Our Lives. She also played the character Hanna in the TV series Pretty Little Liars. She began her acting career with commercials. Benson is one of the stars in Spring Breakers.

All content from Kiddle encyclopedia articles (including the article images and facts) can be freely used under Attribution-ShareAlike license, unless stated otherwise. Cite this article:
Ashley Benson Facts for Kids. Kiddle Encyclopedia.